Google’s Chrome web browser is widely regarded as the best browser in the world… probably because it is. Chrome is feature-rich, fast and extremely versatile thanks to a terrific ecosystem of third-party extensions. Other browsers from Microsoft’s Edge to Mozilla’s Firefox have been gaining in certain areas recently, but no other software offers the all-around experience Chrome affords.

Of course, nothing is perfect and that goes for Google’s web browser, too. As anyone who uses Chrome knows, it can be a huge memory hog, especially for users who leave multiple tabs open all the time. There’s good news to be had, though: An update is coming that should have a dramatic impact on resource consumption.

As covered in a recent post on the V8 JavaScript Engine blog, there are some big improvements coming to Chrome 55 that will have a major impact on RAM consumption.

“Memory consumption is an important dimension in the JavaScript virtual machine performance trade-off space,” Michael Hablich wrote in his post. “Over the last few months the V8 team analyzed and significantly reduced the memory footprint of several websites that were identified as representative of modern web development patterns.”

An upcoming Google Chrome update that utilizes the new engine is already in testing, and it has been found to reduce memory consumption by as much as 35% to 50% or even more, in some cases.

The following graph shows RAM consumption across a variety of websites in Chrome 53, the current public version, as compared to the new version currently being tested. 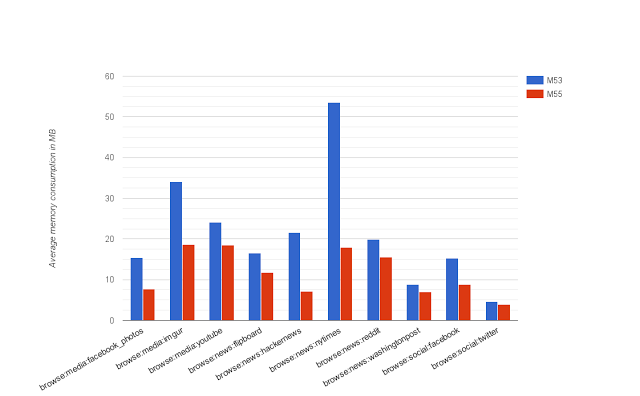 Google is expected to release its Chrome 55 update in early December.