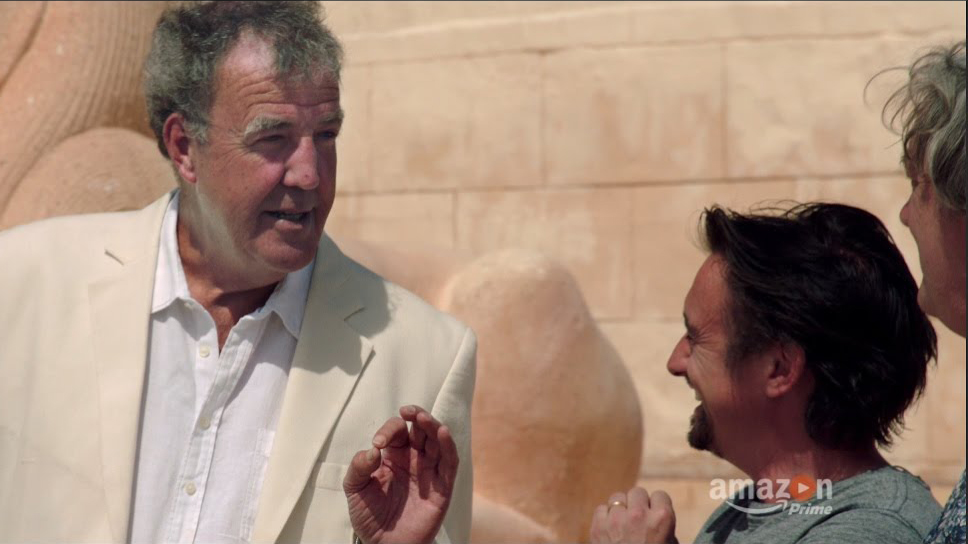 We all knew that The Grand Tour, Amazon’s car show hosted by Jeremy Clarkson, Richard Hammond and James May, was going to have some similarities with old Top Gear. But last night’s premiere really did confirm that it’s really just Top Gear with a more international location, the same jokes, and a whole lot more money.

On the surface, enough things are different to Top Gear to satisfy the BBC’s lawyers. The show doesn’t have one fixed studio location; rather, it has a big tent, which it moves around from location to location every week. The first place it visits is a California desert, though, which is about as different to Top Gear‘s studio on a rainy airfield in England as you can imagine.

The first episode opened more or less as you’d imagine: a short intro film in which Clarkson is shown running, tail between legs, from his old job at the BBC. It segues neatly into all the presenters getting on stage in front of adoring fans, and then it’s mostly business as usual. Three men sitting in chairs cracking jokes, occasionally interspersed with car films.

For the first episode, The Grand Tour seems to go out of its way to emphasize that it’s going to be the best motoring show on the planet, not just a sitcom with a bunch of middle-age men. The team lined up a three-way battle between the McLaren P1, Porsche 918 Spyder, and the Ferrari LaFerrari. It’s a real battle for the ages, and the presenters dedicated pretty much the entire episode to thrashing all three cars around a track.

It’s a far cry from what Top Gear was doing shortly before Clarkson had left. There was a lack of gratuitous stunts in these films, and it stays much closer to the motoring-show roots. The end result is a show that’s not quite serious, still like crack to car enthusiasts, and good enough to convince me to sign up for a Prime membership. Well played, Amazon.