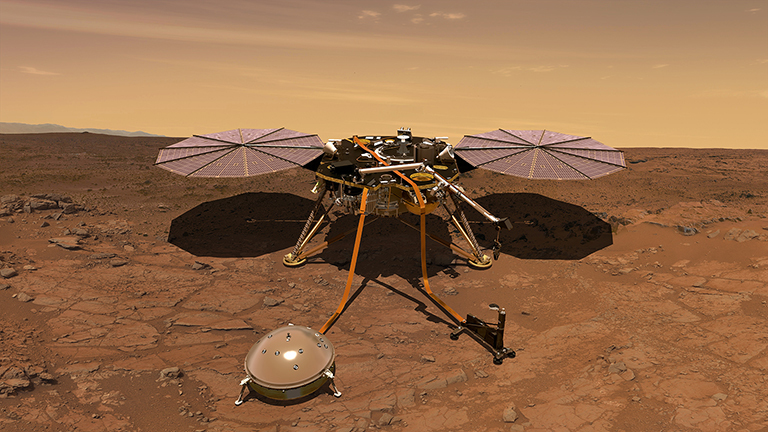 NASA’s InSight lander has spent the bulk of 2018 flying through space towards its target, Mars. Today it finally arrived, passing through the planet’s atmosphere, deploying its parachute, and then touching down on the Red Planet. NASA live streamed video of its Jet Propulsion Laboratory mission control room which was filled with very happy scientists and engineers in the wake of InSight’s arrival.

In an age where we have rovers driving around on Mars this might not sound like a big deal, but nothing could be farther from the truth. The amount of work that goes into a mission like this is virtually invisible from the outside. InSight’s team, however, would be quick to tell you that the work began nearly a decade ago.

The biggest challenge for NASA when it comes to landing on Mars is the inability to test what the hardware will do in real-world conditions. The team of course tests all the hardware in simulated environments, like putting the parachute in a wind tunnel to stress it to its limits, but testing the actual timing between the different phases of landing is essentially impossible without going to the planet itself.

Thankfully everything came together today, and NASA’s InSight lander has ended up more or less exactly where it was supposed to. The landing site is never a pinpoint perfect spot, and while the area is remarkably flat there are still rocks and boulders that could have given the lander trouble. It seems it’s avoided those obstacles and come down just as its handlers wanted it to.

Going forward, the InSight robot will deploy its instruments and begin listening closely to the inner workings of the planet. Its mission, which is slated to last two years on the martian surface, will task it with returning data on whatever it hears going on beneath the planet’s outer crust. What will it find? Will the guts of Mars be like Earth or does the Red Planet have a curve ball it’s ready to throw? We won’t have to wait too long to find out.