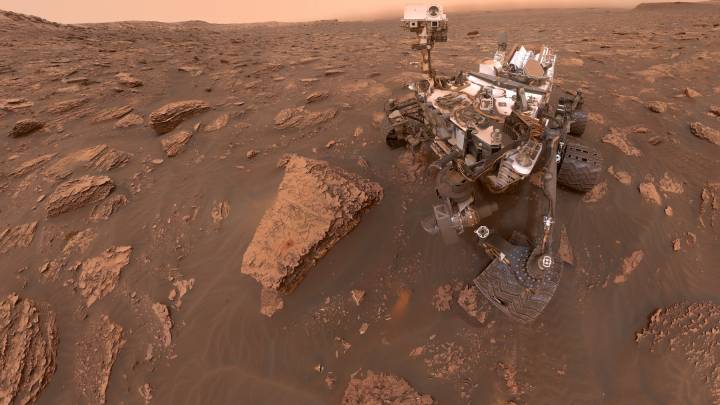 NASA has been studying Mars for a long time now. Scientists working with the various rovers that have been sent to the Martian surface have uncovered plenty of interesting things, but evidence supporting the theory that there was once life on the Red Planet is still elusive. Finding organic molecules could go a long way toward changing that, so news that a team of NASA researchers now believes that organic salts are almost certainly present on Mars is pretty exciting… but there’s a catch.

In a new blog post, NASA explains that a group of scientists publishing their work in the Journal of Geophysical Research: Planets believe they’ve discovered indirect evidence of organic salts on Mars in samples collected by NASA’s own Curiosity rover. The rover’s Sample Analysis at Mars (SAM) automated chemistry lab returned data that hints at Martian salts, but known where those salts came from is another matter entirely.

Organic molecules on Mars could be a sign that life once existed there. It would be a monumental discovery, of course, but simply finding this “smoking gun,” as it were, isn’t proof enough to make a declaration. There are certain geological processes that can also generate organic molecules, and these can happen in the complete absence of life. It complicates the discoveries quite a bit, but if these salts are found it’ll be vital that NASA focus on the regions where they are if they hope to uncover hard evidence of life.

“If we determine that there are organic salts concentrated anywhere on Mars, we’ll want to investigate those regions further, and ideally drill deeper below the surface where organic matter could be better preserved,” James M. T. Lewis of NASA’s Goddard Space Flight Center said in a statement. Lewis led the research into the possible presence of salts on Mars. “We’re trying to unravel billions of years of organic chemistry and in that organic record there could be the ultimate prize: evidence that life once existed on the Red Planet.”

NASA’s article offers an explainer of what Lewis and his team did to differentiate their findings from possible false positives:

Lewis analyzed a range of organic salts mixed with an inert silica powder to replicate a Martian rock. He also investigated the impact of adding perchlorates to the silica mixtures. Perchlorates are salts containing chlorine and oxygen, and they are common on Mars. Scientists have long worried that they could interfere with experiments seeking signs of organic matter.

Indeed, researchers found that perchlorates did interfere with their experiments, and they pinpointed how. But they also found that the results they collected from perchlorate-containing samples better matched SAM data than when perchlorates were absent, bolstering the likelihood that organic salts are present on Mars.

This indirect evidence isn’t enough to state with certainty that these salts exist, but it’s definitely a clue that they may. Going forward, more intensive research into these salts and potentially hunting down the areas where they are concentrated could (and probably should) be prioritized.