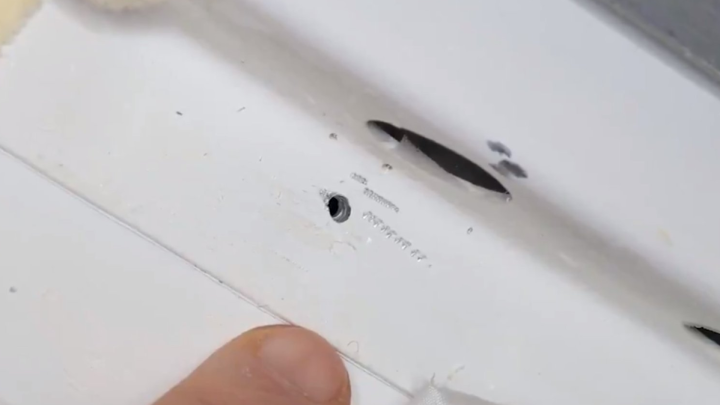 Yesterday, Russian space organization Roscosmos and the European Space Agency broke the news that the International Space Station had sprung a leak. That’s a pretty big deal for the astronauts who are riding what amounts to a floating science laboratory, so when the spacecraft’s alarms began to ring they rushed to find the source of the leak and fix it.

As it turns out, a tiny meteorite is thought to have struck the space station, leaving a small hole in one of the modules. But what do you do when you see a hole in your high-flying lifeboat? You plug it with your thumb, of course!

As the Telegraph reports, NASA’s live radio feed to astronauts aboard the ISS revealed that one of the astronauts was forced to plug the small hole with his thumb while the rest of the crew readied a more permanent fix.

“Right now Alex has got his finger on that hole and I don’t think that’s the best remedy for it,” a voice explained. It wasn’t long before the astronauts had a better idea, and patched the hole with some epoxy and — you guessed it — duct tape.

When your spaceship suddenly starts leaking air, you fix the hole with duct tape & a gob of epoxy. Nice save, @Space_Station crew! https://t.co/1Va8idShJw pic.twitter.com/pxSJY6eNhc

As you can see from the image posted by former ISS inhabitant Chris Hadfield, the hole doesn’t look particularly dangerous. However, because the inside of the space station is pressurized and filled with an air and oxygen mixture to allow the crew to breathe without issue, any breach of the airtight seal must be dealt with in short order.

Thankfully, not much air was spewed into space, and the space station still has “weeks” of air in its reserves, according to a statement by the European Space Agency.

Living aboard the ISS comes with these kinds of risks. Scientists know that there’s lots of undetectable, tiny debris that could cause problems for spacecraft in Earth orbit, but there’s not much they can do about it besides fix issues if and when they arise.

It’s not just natural debris like the tiny piece of rock that made this hole that astronauts have to worry about. Manmade space junk is a real problem in Earth’s orbit, and astronauts on the International Space Station even took the step of installing a debris sensor late last year to monitor the tiny bits of manmade trash that are colliding with the craft on a regular basis.