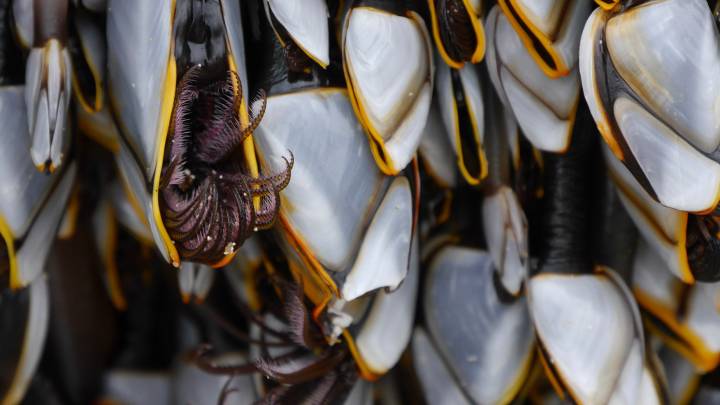 If I told you that someone walking on the beach found $65,000 worth of something you’d probably assume it was a fancy gold watch or a particularly extravagant piece of jewelry. Well, a family in the UK stumbled across a fortune during their recent trip to a beach, but it wasn’t in precious gems or gold, it was in hundreds upon hundreds of tiny sea creatures known as goose-necked barnacles.

I’m not one for high-end seafood joints so I had no idea that these things are such a delicacy, but apparently they can fetch ridiculously high prices. The tiny shellfish can demand upwards of $125 per pound. The Green family found roughly 2,000 of them just lying on the beach.

This particular species of sea creature is apparently notoriously hard to find, and fishermen have gone to extreme measures to obtain them due to their incredibly high sale price. Martyn Green and his wife didn’t have to do anything but walk on the beach in order to find their fortune.

The barnacles are a high-end delicacy in Spain and Portugal, which is what helps to drive their prices so high. These particular barnacles were found locked tight against a large piece of ocean debris that had managed to find its way to the shore.

Green told local reporters that he was planning on keeping the location where he found the barnacles a secret to prevent treasure hunters from descending on the area. However, the original reports of Green’s discovery don’t make any specific note about whether he harvested the barnacles and, if he did, if he managed to find a buyer for 2,000 of the tiny critters.

The thing about seafood (that I’m sure you already know) is that freshness is a major factor in how good it tastes. It’s unclear how long these barnacles were left lying on the beach, how many of them were still alive, and whether any of them were actually edible. You’d have to imagine any reputable seafood dealer would turn their nose up at high-priced barnacles that could have been baking in the sun for days before anyone noticed.

In any case, the Green family definitely stumbled across a fortune, or at least a bunch of sea creatures that, if fresh, would have fetched a high price. Perhaps Green will do a bit of diving now and find the true motherlode of gooseneck barnacles and become a barnacle billionaire.