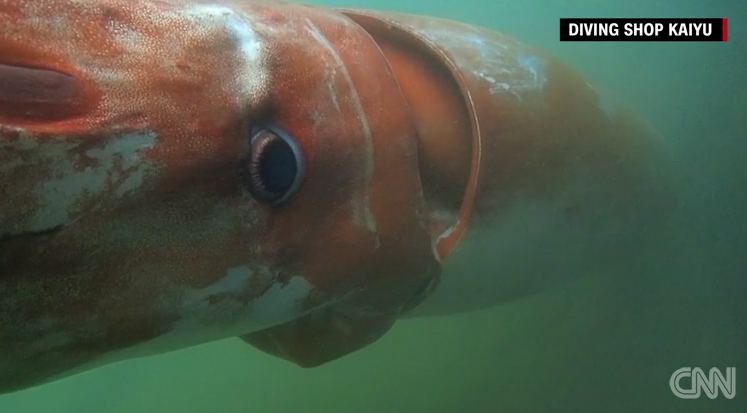 Giant squids aren’t just creatures you read about in fantasy stories or see portrayed on TV and in computer games. They exist in real life, and sometimes they’re spotted in rather unusual places. Such was the case for a giant squid that appeared in a Japanese harbor on Christmas Eve this year and thanks to modern technology, the rare appearance was recorded on video and posted on YouTube.

Giant squids can grow as large as 43 feet (13m) long, and they usually live in deep waters. But people on a pier in Toyama Bay in central Japan saw the creature emerge from the water, CNN reports, and then swimming in plain sight. This particular squid seems to have been an adolescent since it’s smaller than adult giant squid.

The squid swam under fishing boats close to the surface, hanging around the bay for several hours before heading to open water. A diver went in to swim with the huge squid, and a video showing it in all its splendor was recorded using a submersible camera.

“My curiosity was way bigger than fear, so I jumped into the water and go close to it,” diver Akinobu Kimura told CNN. “This squid was not damaged and looked lively, spurting ink and trying to entangle his tentacles around me. I guided the squid toward to the ocean, several hundred meters from the area it was found in, and it disappeared into the deep sea.”

This is the first such sighting this year and more are expected. 16 Architeuthis squids were trapped by fishing nets last season (from November to March), the Uozu Aquarium curator Yuki Ikushi told CNN.

“We might see more in this season, but it’s very rare for them to be found swimming around (the fishing boats’) moorings,” Ikushi said. Check out video of this giant beast below.