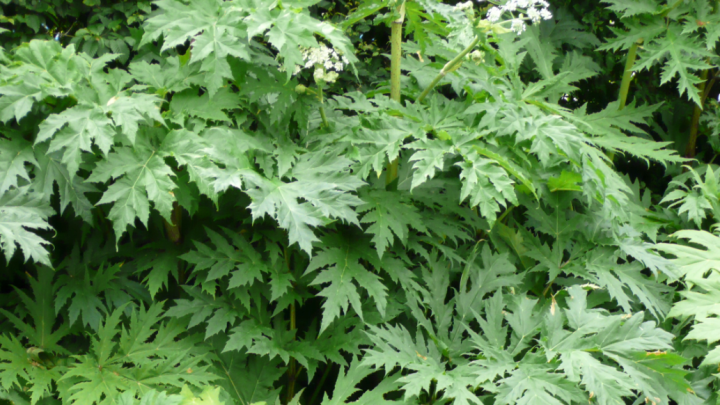 The long, sunny days of summer are coming — in some areas they’re already here — but anyone who comes across the Giant Hogweed plant is going to want to stay away from the sun at all costs. The plant is, put simply, an absolute menace.

Don’t let its fluffy white flowers fool you; the Giant Hogweed can cause incredible pain and life-long scarring if you happen to touch it. Its sap can wreak havoc on your skin, and you might not even know you’ve fallen victim until it’s too late. The massive weed is spreading to new states this year, and as Popular Science reports it’s popping up in areas that have never seen it before.

Giant Hogweed is, as its name suggests, very large. It can easily top six feet in height and stretch its leaves to a diameter of over five feet. Depending on its age, it will be topped with a crown of white flowers. Oh, and it can cause permanent scarring and blindness.

Giant Hogweed is one of several oversized plants equipped with sap that causes phototoxicity. You see, the sap itself doesn’t actually damage your skin, but it makes you many times more sensitive to UV damage from sunlight. Brushing against the plant or, even worse, breaking the stem or leaves and getting the sap on exposed skin, is incredibly serious.

If not thoroughly cleaned immediately, skin that has been exposed to the sap will blister dramatically if left in the sun for any length of time. It can cause scars and long-lasting light sensitivity, and depending on the severity of your exposure, the effects may be permanent. Even worse, if you accidentally rub your eyes with sap residue on your fingers, it can cause blindness.

Other plants in the same family, including the Cow Parsnip and Wild Parsnip, can cause similar skin issues, but the Giant Hogweed is often cited as being the most dangerous. Making things even more complicated, the Angelica family of plants looks a lot like the Giant Hogweed and its brethren. Angelica isn’t toxic, and is even grown for various medicinal uses, but mistaking one species for the other is a mistake you wouldn’t want to make.

If you suspect you’ve gotten some of the toxic sap from a Giant Hogweed or similar plant on your skin it’s advised that you wash it off as soon as possible with soap and water. Additionally, keeping the skin out of direct sunlight for several days is sometimes advised, just to be on the safe side. Obviously, if you believe you’re getting a serious burn you should contact your doctor immediately for guidance.