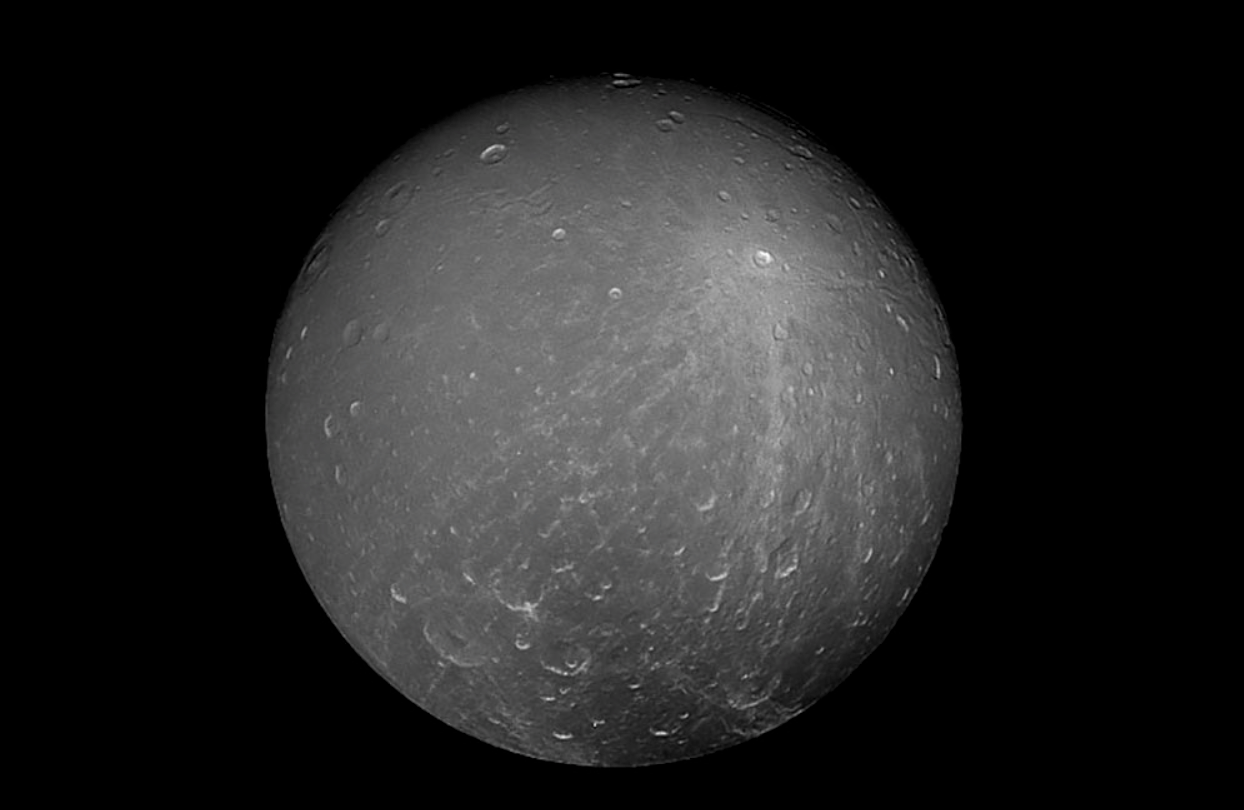 NASA has spent a significant amount of time studying Saturn’s moons Titan and Enceladus, and while those are the two we most often hear about and see photos of, the planet has many more natural satellites that deserve our attention. It might be hard to believe, since Earth only has a single moon in its night sky, but Saturn has at least 62 moons. Many of them are quite small, but Dione is one of the larger ones. Showcasing a photo of Dione taken by the now-destroyed Cassini spacecraft, NASA explains what little we know about the frosty world.

The photo was originally taken way back in July of 2012, but it’s still a rather stunning glimpse at the far-off moon. According to NASA, the photo was taken when Cassini was at a distance of about 260,000 miles from its surface, which is close enough to reveal some of the most interesting details of its surface.

“Dione is about 698 miles (1,123 kilometers) across,” NASA explains. “Its density suggests that about a third of the moon is made up of a dense core (probably silicate rock) with the remainder of its material being water ice. At Dione’s average temperature of -304 degrees Fahrenheit (-186 degrees Celsius), ice is so hard it behaves like rock.”

The ice-covered moon is Saturn’s fourth largest in terms of overall size, and like its smaller brother Enceladus, it’s thought that its orbit around Saturn is capable of tidal heating. That means that liquid water may be present deep under its frozen crust, which is tantalizing for alien hunters and astronomers alike.

“A picture is emerging that suggests Dione could be a fossil of the wondrous activity Cassini discovered spraying from Saturn’s geyser moon Enceladus or perhaps a weaker copycat Enceladus,” Bonnie Buratti of NASA’s Jet Propulsion Laboratory says. “There may turn out to be many more active worlds with water out there than we previously thought.”

Observations of Dione by Cassini have revealed the presence of massive cracks in its icy surface, similar to those present on Enceladus. It is thought that its hard crust may still be faintly spraying water, though not to the same degree of its smaller brother.