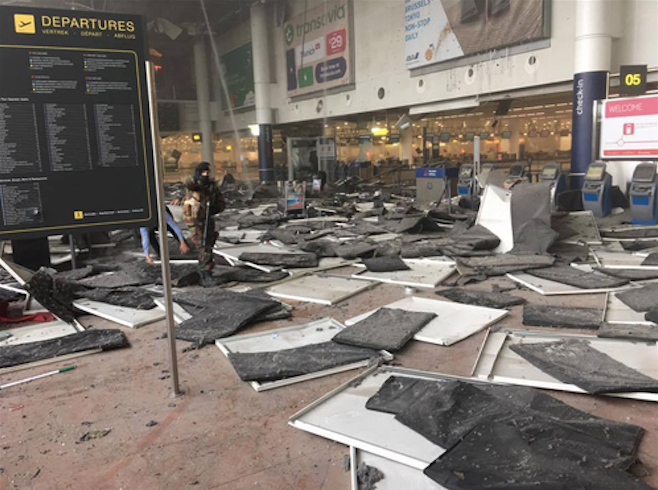 A new wave of terrorist attacks has hit Europe, following the incidents in Ankara, Turkey. A series of explosions shocked the Brussels airport on Tuesday morning, killing at least 13 people and injuring a further 35 others. All airport operations have been shut down for the day, with the facility being evacuated shortly after the explosions.

DON’T MISS: See how the iPhone SE stacks up against the iPhone 6s and iPhone 5s

Two explosions hit the airport, CNN reports, and a third was heard at a subway station in the suburb of Maalbeek, near the European quarter where much of the European Union is based. All metro stations have also been closed, with the EU’s institutions being at “alert level orange,” with all EU meetings having been postponed.

Brussels was already on a high-security alert following the arrest of Salah Abdeslam in the city last week, who’s believed to be one of the masterminds of the Paris attacks from mid-November.

Eurostar trains out of the Brussels Midi stations will not be running, and Belgians are advised to stay indoors for the time being.

It’s not clear at present who’s behind the attacks. Belga agency said shots were fired, and shouts in Arabic were heard shortly before the blasts, according to Yahoo News. The explosions centered on an American Airlines desk in the departure hall, the site notes.

“When I opened the curtains and looked out, I could see people fleeing,” Anthony Barrett, who witnessed the incident from a hotel across the terminal building, told CNN. “It’s clearly a very serious incident.” He said that 19 to 20 stretchers were carrying people out, with luggage trollies also used for the wounded.

Jefferey Edison, a traveler who cleared security and was at the gate at the time of the blast, said he “suddenly saw” 200 to 300 people rushing toward him from the security checkpoint, and that it took authorities some 25 minutes to inform the passengers about what had happened.