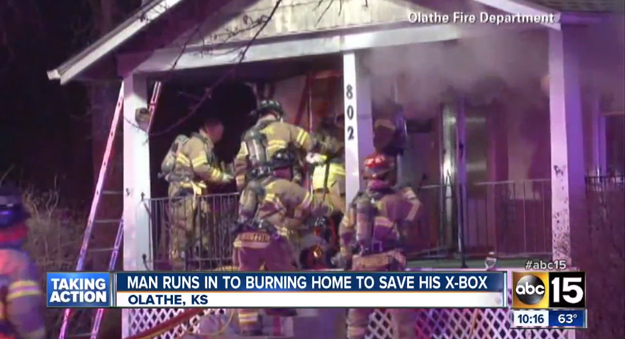 Heroes are a rare breed, but they do exist. Every so often, we see a news story that reminds us there are still people out there who will rise to the occasion and summon the courage to help their fellow man despite imminent danger. Against all odds, they stare death in the face and fight through the fear. Fueled by adrenaline and a willingness to go above and beyond in order to help those in peril, only a select few will put themselves in harm’s way for the sake of others. The latest tale of an ordinary person becoming a hero comes from Kansas, where a man rushed back into his burning home to save the love of his life… his Xbox.

Local news channel ABC15 brings us the story of an Olathe, Kansas man who woke up last Friday morning to find his home ablaze. He quickly ran outside to find safety from the inferno on his front lawn. Once outside, however, he heard the call. The man steadied himself and rushed back into his burning home, not to save a family member or a beloved pet, but to rescue his helpless Xbox video game console from certain death.

As is the case with all real heroes, we never learn the man’s name.

It is not known whether the console was a new Xbox One or an older Xbox 360 model, nor is it known if the man realized that his saved game data was probably backed up to the cloud. What’s important is that the Xbox escaped completely unharmed. Its owner had to be treated for smoke inhalation, but he also escaped serious injury.

ABC15’s segment on the story is embedded below.