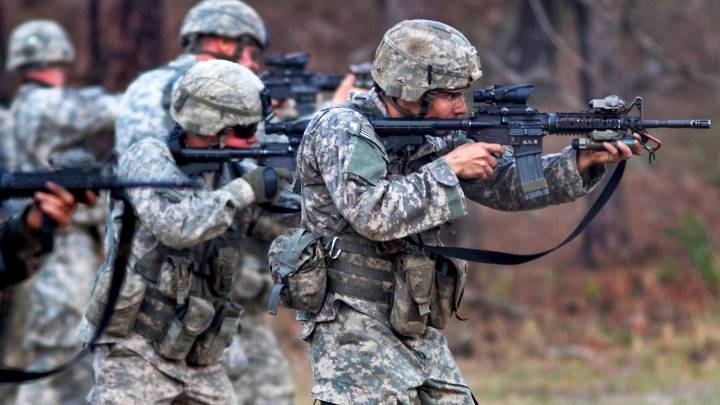 Last summer, the U.S. Army confirmed that soldiers will begin wearing the new Army Combat Uniform (ACU) that bears the Operational Camouflage Pattern (OCP) – also known as Scorpion W2.  They are now being issued, and soldiers are expected to retire their prior uniforms by summer 2018.

This means it’s the end of the line for the Universal Camouflage Pattern (UCP), which was known for its digital-like appearance. Camouflage has undergone numerous changes in the past decade, and the new OCP is just the latest effort by the U.S. military to develop the “perfect camouflage.”

Today, we think of khaki as comfortable casual wear but it was born out of military necessity and was among the first types of camouflage.

In England, irregular units adopted drab colors, as did gamekeepers, to hide from game and poachers. By the Napoleonic Wars, British rifle units – including the 95th – were outfitted in green jackets. This was a contrast to the scarlet uniforms of the day. Those British ‘red coats’ dated back to the New Model Army ordinance, and were based on the traditional colors of the Yeoman of the Guard and the Yeomen Warders. Red is a color of the Tudor Rose, and the earliest ‘red coats’ were worn with white trousers – the original ‘Union’ flag of the United Kingdom was red and white.

As the British Empire expanded, it soon became apparent that scarlet uniforms made of heavy wool were unsuitable for tropical climes, such as the Indian subcontinent. Yet, for the better part of 70 years, the British Honourable East India Company, as well as regular army troops that served in India, retained their scarlet uniforms. This changed when Sir Harry Lumsden raised a Corps of Guides in 1848 for frontier service at Peshawar, near the Afghan border in what is now Pakistan. These troops wore uniforms based on their native attire. The uniform consisted of a dust colored smock that closely matched the local soil. It was thus named after the soil’s color using the Persian word “khaki,” meaning ash-colored.

“[Khaki] was first used by the British by the British-Indian Army Corps of Guides cavalry regiment in 1849 in order to render the troops less conspicuous in their skirmishes with tribesmen on the North-Western Frontier of India (now Pakistan),” British historian Nigel Thomas, told FoxNews.com. “It was adopted by other British-Indian regiments during the Indian Mutiny of 1857 but then abolished, only to reappear in 1868.”

Khaki became the first “universal” camouflage by the end of the 19th century when most European nations that had colonies overseas utilized similar-colored ‘tropical’ uniforms. One interesting irony is that in many cases, European officers and NCOs were outfitted with their “European” style uniforms, while colonial troops wore the khaki colored ones.

Camouflage in World War I

Although the European powers utilized khaki in the colonies, this practice wasn’t carried on in Europe – so when the armies marched to war in 1914, some soldiers were still outfitted in bright uniforms that were more practical on the parade ground. This was most evident with the French Army, which wore a uniform little changed from that of the Franco-Prussian War (1870-1871) and included a dark blue jacket and red trousers – similar to the British uniform, it matched the colors of national flag.

As the war bogged down into the hellish system of trenches, soldiers in the field sought ways to better blend in.

“Camouflage was used as soon as the war started,” Doran Cart, curator of the National World War I Museum in Kansas City, MO. told FoxNews.com. “It got more sophisticated as the war progressed from molding forms to look like dead horses to hiding forward observers to covering entire roads with netting, creating a false environment for aerial observers to see.”

In addition, newly introduced steel helmets were painted in patterns to break up the lines. The Germans adopted a number of unique patterns, and the order to paint the helmets came from up high.

“The gist of Order II Number 91,366 on July 7, 1918, signed by German Quartermaster General Erich Ludendorff, was that helmets would be painted in several colors in keeping with the season,” Cart told FoxNews.com. “Finger-wide black dividing lines between the colors were part of the regulation. The patterns and colors used varied widely.”

Related: How the modern combat helmet was born in the trenches of France

The German patterns were widely copied by the Americans who went “over there,” and many artistic soldiers created a variety of unique camouflage patterns. However, American helmets were likely painted not for use in trenches, but more for the boat ride home and the subsequent victory parades. But the use of camouflage helmets likely helped inspire future American camouflage patterns.

By the outbreak of World War II, the U.S. military had done little in the way of developing camouflage. American soldiers were wearing khaki, but not as camouflage. Khaki uniforms had become the universal “summer” field uniform for the U.S. Army and United States Marine Corps – and in the latter case, it even had a British connection.

The United States Corps of Engineers was working on camouflage in 1940, but in July, 1942, General Douglas MacArthur called for the production of 15,000 jungle camouflage uniforms for use in the Pacific Theater. The chosen pattern was by Norvell Gillespie, a horticulturist and garden editor of Better Homes and Gardens. It consisted of a spot design of greens and browns, and was reversible to a tan/brown variation that could be used in fall and early spring conditions. It featured five colors in total and was nicknamed “frogskin” for its spotty pattern.

“The first large-scale combat usage of camouflage by the Marine Corps during WWII took place during the Solomon Island Operations, specifically on Bougainville in November of 1943,” Tulkoff told FoxNews.com. “These uniforms were extremely well suited for the dense jungle and foliage on the island. However in contrast, several weeks later the invasion of the island of Tarawa, which was a small sandy island with little vegetation other than palm trees created little opportunity for the camouflage to be effective.”

The vast differences between the islands and the toll that the environment took on clothing eventually led to camouflage uniforms being removed as standard combat equipment. The same pattern only saw limited usage by the U.S. Army in Europe.

Ironically, one reason that the U.S. Army didn’t use camouflage widely in Europe was because the German military was using a variety of patterns – and there was concern that soldiers in camouflage attire would be mistaken for the enemy.

A number of trials occurred in the 1950s, but after the experiences in the Pacific, it was determined that one camouflage pattern wouldn’t be suited to all terrains. Instead, soldiers were issued basic olive green (OG) shade 107 cotton uniforms. Just as helmets had been painted in World War I to break out the distinct outline, camouflage covers were kept in use.

“Camouflage helmet covers continued to be used through the war and then through Korea and Vietnam, even when camouflage uniforms were not being issued,” added Tulkoff.

In Vietnam, the American M1 steel helmet was issued with a cover that featured the USMC Mitchell pattern, which consisted of overlapping dark brown, russet, beige, light brown & ochre “leaf” shapes on a tan background. This pattern was tested for uniforms, but rejected and only widely used with the helmet covers.

There were some exceptions in Southeast Asia where the Long Range Reconnaissance Patrols (LRRP), as well as U.S. Navy seals utilized “Leaf-pattern” camouflage uniforms in a limited capacity. In addition, members of the Reconnaissance Team Zeta, which conducted covert cross-border operations under the auspices of the Military Assistance Command Vietnam’s Studies and Observation Group (MACV-SOG) often wore private-purchase “tiger stripe” camouflage that was never officially used by the U.S. Army.

After Vietnam, the U.S. Army Engineer Research and Development Laboratory (ERDL) developed a general purpose jungle camouflage that consisted of mid-brown and grass green organic shapes with black “branches” on a lime green background. This pattern has been widely copied and is still in use throughout the world. It was developed at a time when it was believed that the next major conflict would be against the Warsaw Pact in Europe.

Desert Camouflage to the Modern Day

At the end of the Cold War, it seemed that the U.S. and NATO might not be engaged in conflict in Europe, and the Iraqi invasion of Kuwait in 1990 only further reinforced that sentiment. The U.S. Army developed the Desert Battle Dress Uniform (DBDU) camouflage in 1977, which utilized a six-color scheme that became known as the “chocolate chip” pattern because it looked like cookie dough. The DBDU camouflage was officially introduced in the 1990s and used during Operation Desert Storm in 1991 and Operation Restore Hope in Somalia in 1993. However, since it was developed in the rocky desert of California, it didn’t blend in with the sandy deserts of the Middle East and East Africa. The U.S. Military went back to the drawing board and developed a three-color pattern known as Desert Camouflage Uniform (DCU) – nicknamed “coffee stain” by some U.S. personnel.

In developing the DCU, desert soil samples from Saudi Arabia and Kuwait were examined, and it was widely adopted by the late 1990s. The DCU was used in the October 2001 Operation Enduring Freedom and Operation Iraqi Freedom in 2003.

While the DCU was considered an improvement over the DBDU, the U.S. Military sought to standardize the camouflage so that one Army Combat Uniform (ACU) could be worn in any environment. This led to the development of the U.S. Army’s Universal Camouflage Pattern (UCP), which blended tan, gray and green to work equally well in desert, woodland, and even urban environments. The United States Marine Corps developed its own version in the Marine Pattern (MARPAT), while Canadian Forces utilized a similar pattern.

What is unique about the UCP is that black is omitted from the uniform after it was found to be highly visible to both to the naked eye and modern optics. Instead several shades of gray are incorporated. This pattern is sometimes known as a “digital camouflage” as the colors resemble computer pixels.

The effectiveness of the pattern was largely questioned however, and in July 2014 the Army announced that the seemingly high-tech digital camo was out and Scorpion W2 was back in. The irony here is that the OCP was actually developed as part of the Object Force Warrior program in 2002.

With the introduction of OCP, it is clear that camo has come a long ways from khaki and drab colors.