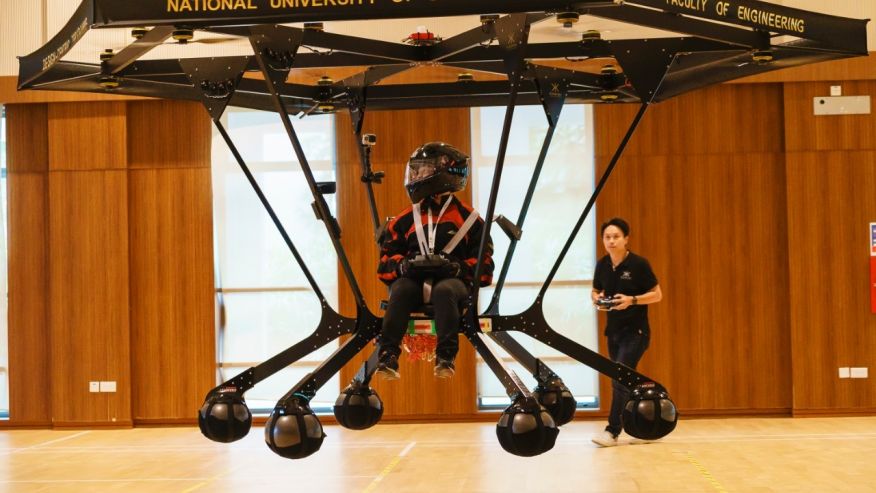 Ever wanted your own personal flying machine?

Well, a team of engineering students at the National University of Singapore (NUS) appear to be one step closer to making that a reality after they successfully tested a craft that is capable of vertical take-off and landing with one person on board.

Dubbed Snowstorm, this electric powered aircraft isn’t all that much to look at just yet. The engineering student chose to focus on form over style, building a craft with a hexagonal frame that features motors, propellers and inflated landing gear.

Related: How US firefighters could harness the power of military drones

And most most importantly, it works.

In a video demonstrating the craft at what looks like a gymnasium, a test pilot can be seen sitting on Snowstorm as it lifts off the ground, hovers for about 15 seconds and then lands gently. They claim it stay in there for as long as 5 minutes.

“A common trope in popular science fiction is the projection of humans flying on our own – think “The Jetsons,” or even “Back to the Future,” Joerg Weigl, one of two supervisors of the project, who is from the Design-Centric Programme at the NUS Faculty of Engineering, said in a statement.

The students, who built the craft as part of FrogWorks which engages students in the design and construction of leisure crafts through a collaboration between NUS Faculty of Engineering’s Design-Centric Programme and the University Scholars Programme, envision a personal craft that someone might use in a large indoor space.

Previous FrogWorks projects have included the conversion of a sport motorcycle and a yacht from petrol to electric propulsion.

“Designing and building Snowstorm was a great learning opportunity for us. The toughest part of this engineering challenge was ensuring a good thrust to weight ratio to allow the craft to lift a person into the air,” Shawn Sim, a third year engineering student at NUS, said.

“At every stage of our design, we constantly had to balance and consider trade-offs between the types of materials, their characteristics and weight,” he said. “In some instances, we even 3D-printed parts, such as our landing gear mount, just so we can have a customized and optimal fit.”