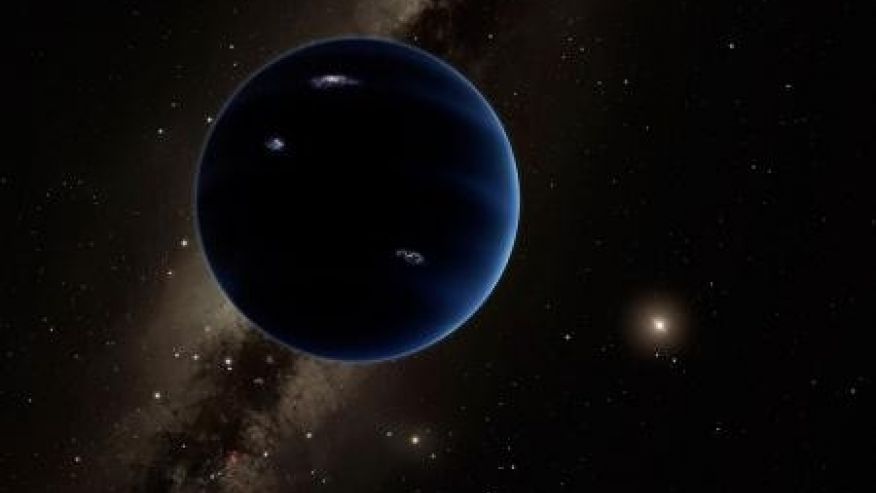 Scientists believe they may have found a giant planet in our distant solar system, possibly the long-sought after Planet X.

It is believed to have a mass about 10 times that of Earth and orbits about 20 times farther from the Sun on average than does Neptune. As a result, it would take this new planet between 10,000 and 20,000 years to make just one full orbit around the Sun.

“This would be a real ninth planet,” CalTech researcher Mike Brown, who along with his colleague Konstantin Batygin, made the discovery which they are calling Planet Nine. “There have only been two true planets discovered since ancient times, and this would be a third. It’s a pretty substantial chunk of our solar system that’s still out there to be found, which is pretty exciting.”

Already gearing up for questions over whether it’s a true planet, Brown points out that it is 5,000 times the mass of Pluto and gravitationally dominates its neighborhood of the solar system – more so than any other known planet.

It’s “the most planet-y of the planets in the whole solar system,” said Brown, who is famous for helping demote Pluto to a dwarf planet.

Describing their work in the current issue of the Astronomical Journal, the researchers said in a statement that Planet Nine helps explain a number of mysterious features of the field of icy objects and debris beyond Neptune known as the Kuiper Belt.

“Although we were initially quite skeptical that this planet could exist, as we continued to investigate its orbit and what it would mean for the outer solar system, we become increasingly convinced that it is out there,” Batygin, an assistant professor of planetary science, said. “For the first time in over 150 years, there is solid evidence that the solar system’s planetary census is incomplete.”

Brown and his colleagues first got onto the trail of Planet Nine in 2014, when a former postdoc of Brown’s, Chad Trujillo, and his colleague Scott Shepherd published a paper noting that 13 of the most distant objects in the Kuiper Belt are similar with respect to an obscure orbital feature. They suggested the similarities hinted at the presence of a small planet.

Related: These Jupiter-like exoplanets aren’t so dry after all

The researchers first considered that there are enough distant Kuiper Belt objects – some of which have not yet been discovered – to exert the gravity needed to keep that subpopulation clustered together. But they quickly ruled this out when it turned out that such a scenario would require the Kuiper Belt to have about 100 times the mass it has today.

That left them with the idea of a planet.

Running a simulation in which the planet’s closest approach to the Sun, or perihelion, is 180 degrees across from the perihelion of all the other objects and known planets – the distant Kuiper Belt objects in the simulation assumed the alignment that they were observing.

The presence of Planet 9 helps explains some oddities of the Kuiper Belt, including its alignment and the mysterious orbits that some of the objects trace.

The first of those objects, dubbed Sedna, was discovered by Brown in 2003. Unlike standard-variety Kuiper Belt objects, which get gravitationally “kicked out” by Neptune and then return back to it, Sedna never gets very close to Neptune.

The researchers also found that their simulations predicted that there would be objects in the Kuiper Belt on orbits inclined perpendicularly to the plane of the planets. In the last three years, observers have identified four objects tracing orbits roughly along one perpendicular line from Neptune and one object along another.

“We plotted up the positions of those objects and their orbits, and they matched the simulations exactly,” Brown said. “When we found that, my jaw sort of hit the floor.”

“When the simulation aligned the distant Kuiper Belt objects and created objects like Sedna, we thought this is kind of awesome — you kill two birds with one stone,” Batygin added. “But with the existence of the planet also explaining these perpendicular orbits, not only do you kill two birds, you also take down a bird that you didn’t realize was sitting in a nearby tree.”

Related: Mars will become a ringed planet when Phobos dies

Brown surmised that Planet Nine could show that there were five, not four, planetary cores that marked the beginning of the universe. It is believed that these four cores gobbled up all the gas around them, forming the four gaseous planets of Jupiter, Saturn, Uranus, and Neptune. If Planet Nine represents this fifth core, Brown said, it could have been ejected into its distant, eccentric orbit as it got close to Jupiter or Saturn.