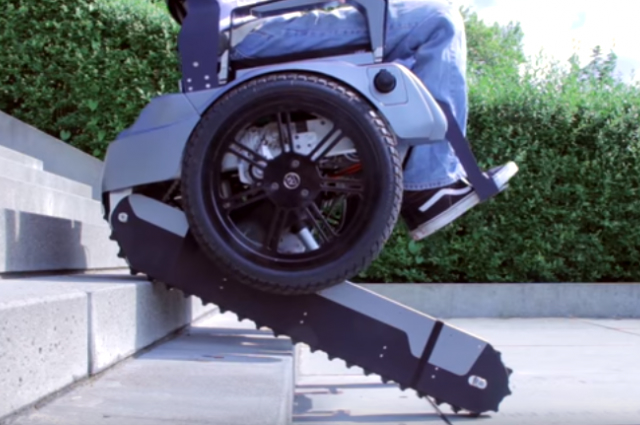 Scientists are still trying to figure out how to restore full locomotion to patients who have suffered debilitating accidents that forced into wheelchairs. But until procedures that can reconnect the brain to lower limbs become widely available, other researchers are studying ways to improve life in a wheelchair. One of the obstacles to overcome is obviously stairs, and a team of inspiring students from Switzerland built an amazing electric wheelchair that can climb stairs by itself.

Called the Scalevo, the device in the following video was developed by 10 students from the Swiss Federal Institute of Technology and the Zurich University of the Arts.

“The great thing is that everything on this wheelchair is automated,” mechanical engineering student Miro Voellmy told Reuters. “If I want to climb the stairs I can just drive up to them, turn around, press one button and all I have to do is control the velocity I want to drive at. The alignment on the stairs, the leveling of the wheelchair driver, is automated, and he can control it, he can view the back with a back facing camera, and have a full, safe, driving experience.”

The Scalevo is a two-wheeled wheelchair that has rubber treads underneath like a tank, which can be used to climb stairs. The system uses gyroscopes to ascend and descend stairs with slopes up to 34 degrees. The user is kept upright at all times, and an airplane-like seatbelt holds the operator in position.

The Scalevo can climb one stair per second, and can travel at about 10 kilometers per hour (6.2mph) on flat surfaces using Segway-style balancing technology that allows for quick turns. It’s not clear whether the product will become commercially available, but the students behind it are considering a Kickstarter campaign to fund development and production.