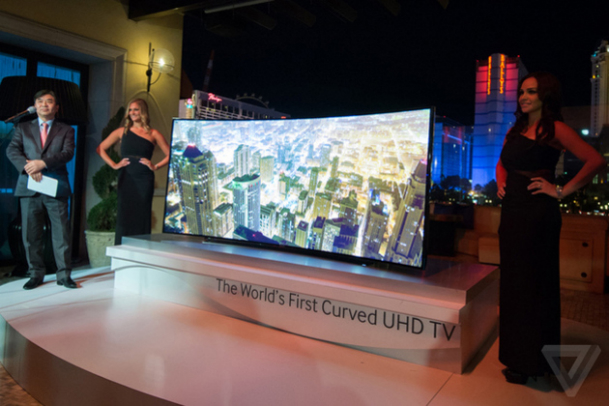 Between them, Samsung and LG unveiled a wide range of new TVs at CES 2014, including a couple of prototypes that can be curved on command by the user – each company has its own model, and both are Ultra High Definition (4K resolution) TVs. During its media event, Samsung unveiled an 85-inch “Bendable TV” that has a mechanical system allowing the viewer to switch between a curved TV display and a flat TV screen with a touch of a button. While this particular feature may seem unnecessary in TVs, Samsung explains that sometimes users may want to bend the TV to better enjoy movies.

A bendable TV “provides even more lifelike picture quality and depth. It gives you a 3D-like effect without wearing 3D glasses. It provides a truly immersive experience” one Samsung exec said during the show. This year, company will sell a variety of 4K TV sets with curved displays that can’t be flattened like the 85-inch prototype, including a 105-inch model with 21:9 aspect ratio and 5120 x 2160 resolution.

Long-time Samsung rival LG is ready to challenge its competitor with a user-flexible TV of its own, a 77-inch curved OLED 4K TV set, CNET reveals. This particular model has a remote button for physically switching between flat and curved modes as well.

“LG’s Flexible OLED TV is a product that has to be seen to be believed because it defies description,” CEO of LG Home Entertainment Company CEO Hyun-hoi Ha, said. “What curved is to flat, flexible is to curved. LG continues to lead the evolution of televisions into the next generation.”

Pricing and launch details for these flexible 4K TV prototypes aren’t available at this time.