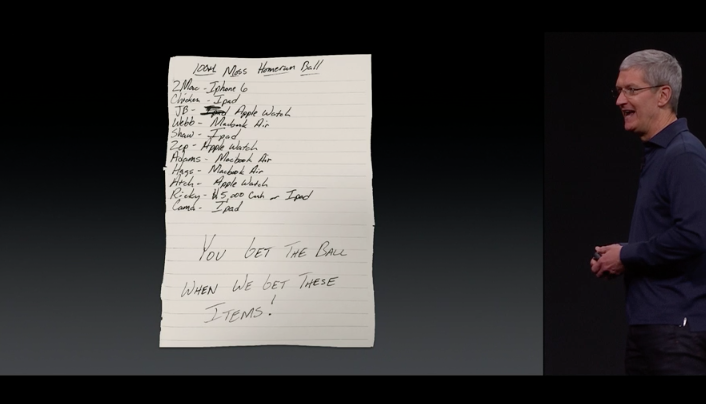 You’ve got to hand it to Samsung for its me-too, whatever-it-takes attitude it has when it comes to battling Apple’s iPhone. The strategy has worked for quite some time, and Samsung still does it, no matter how blatant some of the rip-offs may be – but hey, nobody owns cool, and everybody copies everybody.

But the latest Apple stunt Samsung tried to rip off backfired in the most hilarious possible way.

Apple kicked off last week’s WWDC keynote with a fun anecdote from Tim Cook, who showed off a ransom note Brandon Moss received from his friends so he could get the special 100th home run ball back. Cook showed the ball and said he would pay the ransom, which consisted mostly Apple products. Sure, you might suspect that this was a marketing ploy from Apple, considering the attention it got. Even if that’s the case, kudos to Apple’s PR team for thinking it up.

But, Samsung is suspected to have tried to use the same trick, as Look Insight reports, only a few days after Apple’s big event.

Trevor Bauer, a pitcher for the same Cleveland team, got a hold of another milestone ball — the first hit for rookie Francisco Lindor. He then sent out a tweet posting a ransom note filled with Samsung products.

“Hey @Lindor12BC we have your ball. @indians Bullpen settled for @tim_cook Apple products but we want @samsungmobileus,” he said… from an iPhone.

UPDATE: A Samsung spokesperson contacted BGR to clarify that Trevor Bauer’s tweet was not part of a Samsung initiative.

Of course, this might be a coincidence, and all those people who think it’s a Samsung PR ploy in here might be wrong. But then again, the simpler explanation would be that Samsung tried to mimic what Apple and tried to riff on it.