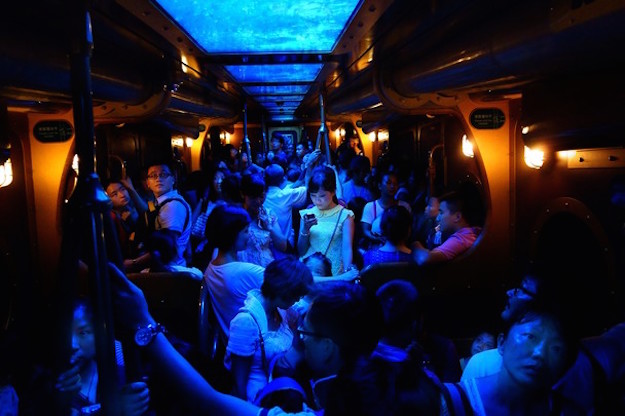 Every year, National Geographic Magazine holds a photo contest where amateur and professional photographers alike can submit stunning, incredible, and breathtaking shots they managed to capture during the preceding 12-month period. With a grand prize of $10,000 on the line, not to mention a whole lot of prestige, the photo competition is wildly and understandably popular.

During last year’s contest, for example, National Geographic fielded more than 92,000 photographs from over 150 countries around the world. And just like last year, this year’s competition will encompass three categories for submission: people, places and nature.

The deadline to enter is November 16, 2015, but photographers have already begun sending in their best shots for consideration. To help give us a taste of what’s to come, National Geographic recently gave The Atlantic permission to publish 24 jaw-dropping photos that promise to be strong contenders even as more entries are sure to come in.

Below are a few of the more notable shots.

This photo below was taken by James Smart. The caption reads, “Jaw-dropping, rare anti-cyclonic tornado tracks in open farmland narrowly missing a home near Simla, Colorado, on June 5, 2015.”

This penguin-heavy photo was taken by Steffen Flügel and comes with the following description: “This was shot in South Georgia in December of 2014. It was probably the most intense moment of my whole trip to Antarctica—it’s just overwhelming standing in there between hundreds of thousands of penguins—it’s not a bad “minority feeling,” but more of a peaceful reassurance that—at least in some places—our planet is still as beautiful as it was before mankind started having a go at it. THANK YOU to all those countries and individuals involved in keeping places like these intact.”

And in one last example, we have this gem from John Moran. The caption reads: “This effect is entirely natural but decidedly surreal as the swirling tannins of the Santa Fe River mix with clear spring water as Lesley Gamble begins her dive at Devil’s Ear Spring in North Florida. The Land of a Thousand Springs, Florida is home to the largest collection of freshwater springs in the world.”

Make sure to check out the full list of 24 photographs over here. They really are incredible.

As for the photo at the top of the post, that was last year’s grand prize winner. Taken by Brian Yen in Hong Kong, the story behind the photo reads: “In the last ten years, mobile data, smartphones and social networks have forever changed our existence. Although this woman stood at the center of a jam-packed train, the warm glow from her phone told the strangers around her that she wasn’t really there. She managed to slip away from “here” for a short moment; she’s a node flickering on the social web, roaming the Earth, free as a butterfly. Our existence is no longer stuck to the physical here; we’re free to run away, and run we will.”