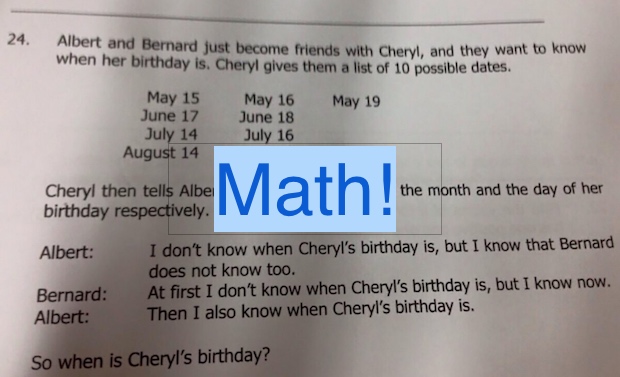 There’s a new viral sensation sweeping the Internet. But this time, it has nothing to do with the color of a dress or a superhuman motorcycle rider crashing and landing on top of a car. This time around, a math problem, of all things, has worked the Internet up into a frenzy.

The math problem in question was initially given to High School students in Singapore who were taking the Singapore and Asian Schools Math Olympiad exam.

The problem reads as follows:

Albert and Bernard just became friends with Cheryl, and they want to know when her birthday is. Cheryl gives them a list of 10 possible dates.

Cheryl then tells Albert and Bernard separately the month and the day of her birthday, respectively.

Albert: I don’t know when Cheryl’s birthday is, but I know that Bernard does not know, too.

Bernard: At first, I didn’t know when Cheryl’s birthday is, but I know now.

Albert: Then I also know when Cheryl’s birthday is.

When is Cheryl’s birthday?

To clear up any potential confusion, note that Cheryl only tells Albert the month of her birthday while only telling Bernard the date.

Can you solve it?

If not, no reason to despair. The organizers behind the Singapore and Asian School Math Olympiad note that it’s a “difficult question meant to sift out the better students.”

The solution and explanation to the problem can be viewed below, with the help of ole’ Albert.

A more detailed explanation, if you’re still not convinced, can be found at The New York Times.

The video below, courtesy of the BBC, also provides a helpful explanation.