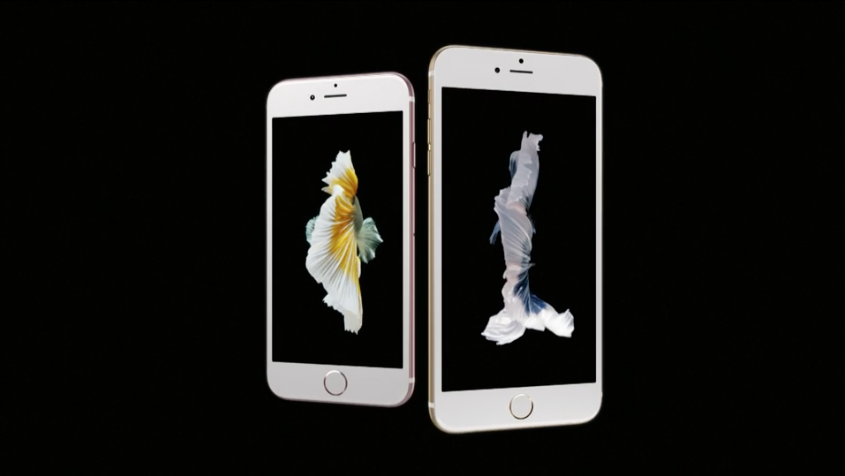 One feature Apple insisted on during the event is the new metal used for making the iPhone 6s and iPhone 6s Plus. We’re looking at sturdier 7000 Series aluminum, like the one used in the Apple Watch, that’s supposed to prevent future bending.

There’s also a fourth color for the new iPhone models, and that’s Rose Gold, or pink, which is what some people will refer to.

When it comes to displays, we have the same 4.7-inch and 5.5-inch sizes, but the screen is protected by even stronger glass covering a brand new Motion background just like on the Apple Watch.

However, there is one new feature coming to the iPhone 6s’ display: Force Touch or 3D Touch as Apple calls it. Basically, the screen is smart enough to tell the difference between a tap, a touch and a pressure touch to offer appropriate responses that should help you navigate faster through menus. 3D Touch Display might not be for everyone, but the feature should surely come in handy to hardcore iOS users looking for shortcuts across the system.

3D Touch works on the home screen but also in apps, with Apple introducing new marketing terms for the new gestures, meet Peek and Pop. A new Taptic engine is found underneath the display, just as the rumors suggested, allowing the device to determine quickly the pressure differences between taps and force touches. Capacitive sensors integrated into the Retina display also help with registering Peeks and Pops.

Peeking lets the user take action in apps without having to open them. Just click on an item on the screen to generate a response on the device from an app, including taking quicker than ever selfies with the camera. These are powerful shortcuts to app that will save you plenty of time.

3D Touch can also be used to bring up the multitasking screen, and navigate between open apps by just swiping the finger across the screen.

The internal components of the new iPhones have also been significantly upgraded. We’re looking at a third-generation A9 chip and an M9 motion coprocessor, to deliver a better, faster and more energy-efficient experience than any previous iPhone. The CPU is 70% faster than the A8, with the new GPU delivering 90% faster performance. No word on RAM but the phones are expected to pack 2GB or memory if certain rumors are accurate.

The M9 coprocessor is now built-in the A9 chip, meaning that it’s always-on.  The Touch ID is even faster than its predecessor.

The cameras of the new iPhone, for the first time, have received major updates when it comes to megapixels. There’s a 12-megapixel iSight camera on the back that has 50% more pixels, better autofocus and a new technology called deep trench isolation. 4K video support is also coming to the iPhone, just as rumors said before the keynote. The front-facing selfie-taking camera has a 5-megapixel sensor, just as rumored, that will use the Retina display as a selfie flash, lighting up three times faster than usual while used as a TrueTone flash.

Moving on to LTE, the iPhone 6s has 23 bands, now supporting LTE-A networks.

Storage-wise, the iPhone 6s will come in the same three capacities, including 16GB, 64GB, and 128GB, which means pricing are similar.

Prices will start at $199 for the 16GB iPhone 6s on contract, going all the way up to $399 for the 128GB iPhone 6s. The respective iPhone 6s Plus versions will be $100 more expensive than the iPhone 6s. Obviously, you don’t have to buy the new iPhones on contract, as most U.S. carriers will offer you many installments and rent plans to choose from. And then there’s an official Apple iPhone upgrade program starting at $32 a month.

The iPhone 6s and iPhone 6s Plus will be available for preorder starting September 12th, with in-store sales set to begin on September 25th in a variety of markets, including the U.S. and Canada, France, Germany and the U.K., Australia, China, Hong Kong, Singapore and Japan.