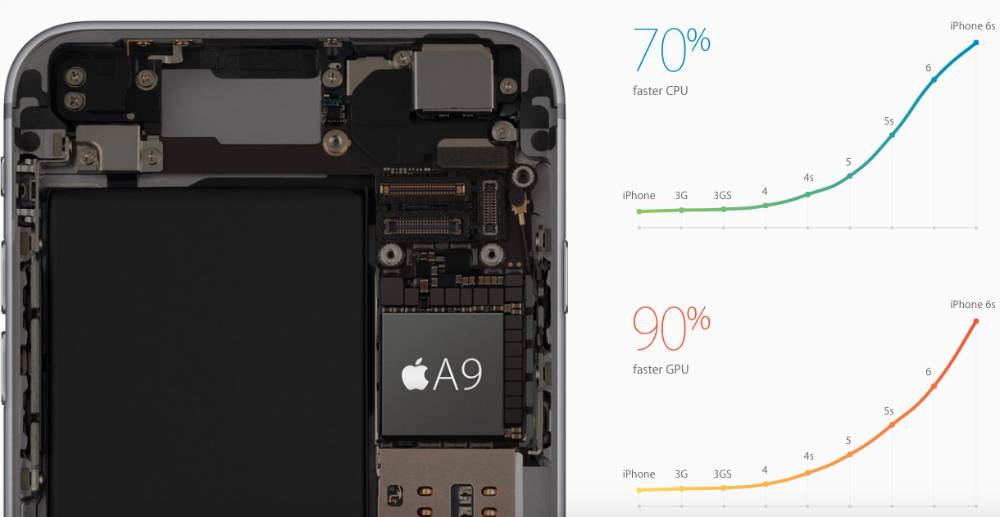 The iPhone 6s is Apple’s best “S” update in iPhone history, featuring both significantly hardware upgrades and new software improvements. But Apple hasn’t shared all the details about the iPhone 6s’ internal components. As was the case with previous releases, the company doesn’t talk about processor speed – other than to say it’s 70% faster than the A8 – RAM, or battery size. The RAM and battery capacity mysteries have been solved already, and thanks to official documentation seen on a website belonging to China’s TENAA regulatory agency, pressing A9-related questions can also now be answered.

How fast is the A9 chip? How many cores does it have? On its website, TENAA says the iPhone 6s has a dual-core 1.8GHz processor and 4GB of RAM – that’s actually a typo, as the phone has 2GB of RAM. The tested model sported 128GB of storage.

The A9 chip is also built on 64-bit technology – that much isn’t a surprise considering Apple was first to adopt 64-bit mobile processors. In addition to the 70% speed gains of its predecessor, Apple also said on stage that the A9 delivers 90% faster graphics performance than the A8.

The new processor, a faster version of which is found in the iPad Pro (the A9X) is also likely built on 14/16nm process technology, which makes it more energy-efficient than the predecessor. That’s a detail yet to be confirmed, but Apple is offering exactly the same battery life estimates for the iPhone 6s and iPhone 6, in spite of the iPhone 6s’ smaller battery.

One other remarkable difference between the A9 and A8 chips is that the new processor also integrates the new motion co-processor (M9), giving the iPhone 6s series always-on Siri capabilities, on top of improved fitness tracking features.

The iPhone 6s Plus has the same A9 chip inside, meaning that it also sports a dual-core 1.8GHz processor. It’s likely that imminent teardowns of the smartphones as well as official benchmarks will reveal more details about the iPhone 6s’ internal components.

Apple’s iPhone 6s handsets are currently available for preorder in a dozen markets including China, and they’ll be released on September 25th in this first wave countries.