Despite some minor hiccups involving over-the-air downloads, iOS 10 adoption appears to be quite strong. According to data compiled by Mixpanel, nearly 14.5% of all iOS users were running iOS 10 within 24 hours of it being released. By way of contrast, recall that iOS 9 adoption last year checked in at about 12% after 24 hours.

Packed with a number of new features, iOS 10 is a compelling update for a variety of reasons. In addition to long-overdue overhauls of Apple Music and Apple Maps, iOS 10 introduces a completely new Messaging system bolstered by more emojis, sticker packs and more.

Mixpanel’s most recent iOS adoption chart can be seen below. 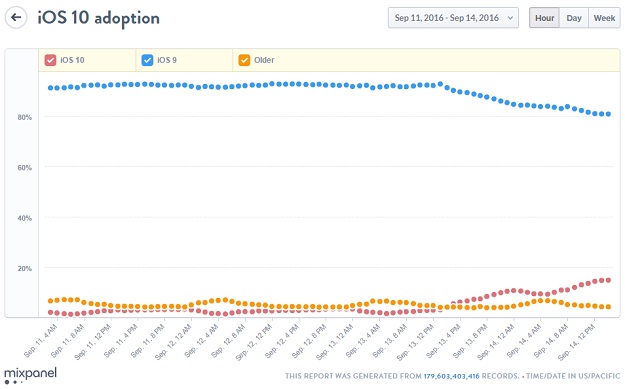 Now for as successful as iOS 10 appears to be, it still isn’t anywhere close to matching the popularity that iOS 7 enjoyed upon its release. Going back a few years, iOS 7 adoption reached 50% in just 5 days. Of course, this is to be expected given that iOS 7 represented a massive design overhaul that completely did away with iOS’ tried and true skeuomorphic design and instead opted for a flatter and more streamlined look.

If you’re one of the growing number of users running iOS 10, make sure to check out our two handy tip guides (here and here) which provide more than 30 tips and hidden features that you can only take advantage of with iOS 10.