By Josh Karp
Updated 10 years ago 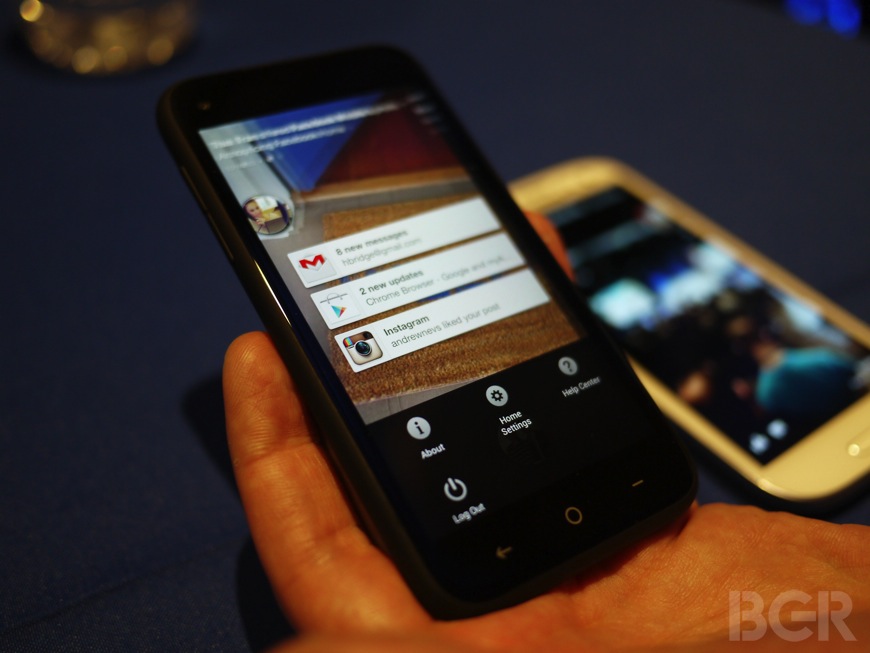 We just had a chance to dive into Facebook’s (FB) new “Home” software suite on the HTC First, and came away with some good early impressions. Press weren’t allowed actual hands-on time, but instead treated to a demo from a friendly Facebook employee. As such, we weren’t able to push Home much beyond the facade of persistent status updates, floating timeline images and Chat Heads. That said, we think that’s the point of Home: It’s a software layer that hides the bulk of the functions on of your Android phone behind a wall of Facebook content and services.

HTC’s (2498) First is a good-looking phone, but is decidedly mid-market in appearance and build. Zuckerberg continually referred to it as being “not too big” which we read as code for “small.” It’s a diminutive phone, which is increasingly apparent in a world full of ever-increasing screen sizes. That said, it looks comfortable in hand, and the black demo model was attractive enough.

Upon powering up, you are greeted with a column of updates from apps such as Instagram, Spotify and… Facebook. One nice thing about the out-of-the-box experience is that it does allow for integration with system notifications, something the downloadable version of Home won’t support. Gestures seemed fast and responsive, too.

Chat Heads, the questionably named floating chat bubble icons, worked as described. They float over other running apps and quickly pop down with a quick tap to reveal the full conversation. The floating idea is good, but with a phone as small as the First, they more or less occupy the bulk of the screen anyway, sort of ruining their intent to promote multitasking. We think these will be much more functional when implemented with the download version on the larger screened devices such as the HTC One and Galaxy S4.

All told, it does what it claims to do. It replaces the Android home experience with an immersive Facebook UI. It’s up to the individual user to decide whether or not they want to shift their mobile phone experience into a full-on mobile Facebook experience, but making the jump pretty much dumps you completely into Facebook land and hides other features — which is the whole point. It will be interesting to see if other OEMs jump on board following on HTC’s coattails, or if this just turns into another red herring destined to be buried in the depths of the Google Play store.

The HTC First launches on April 12th for $99.99 as an AT&T (T) exclusive. In the meantime, be sure to check out our hands-on photo gallery.