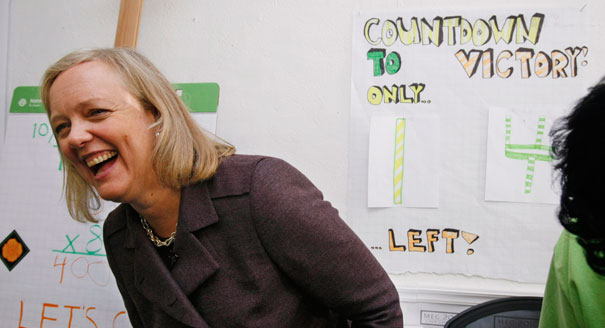 HP (HPQ) seems to be taking a page from Conan the Barbarian, as the company apparently thinks the best thing in life is to watch the market crush your enemies, see them driven before you, and to hear the lamentation of their shareholders. In the wake of Dell’s $24.4 billion buyout announced Tuesday morning, HP put out a statement taunting its rival by noting that the company “faces an extended period of uncertainty and transition that will not be good for its customers” while also vowing to capitalize on Dell’s misery by swooping in to snag its old customers.

“We believe Dell’s customers will now be eager to explore alternatives, and HP plans to take full advantage of that opportunity,” HP wrote.

Of course, given the epic disaster that HP has been for the past several years it’s highly questionable whether HP is in any better longterm shape than Dell is. HP CEO Meg Whitman has said that it will take her at least five years to fully turn the company around, although the company could receive a theoretical boost if Dell’s customers all come flocking to whatever HP happens to be offering.