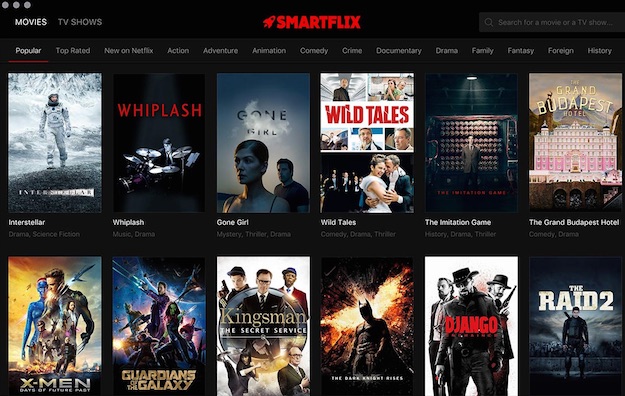 Because Netflix doesn’t own the global licensing rights to all of the movies and TV shows it carries, a good deal of its programming remains completely unavailable to subscribers outside of certain geographic regions. Indeed, one of the reasons why Netflix is so intent on developing its own original programming is precisely because they don’t have to deal with thorny licensing issues.

Now if you find yourself in the frustrating position of wanting to watch something on Netflix that is otherwise geographically restricted, there’s a new desktop app that can help turn that dream into a reality.

This post was originally published on January 6th, and has been updated to reflect changes to Smartflix

Smartflix is an impressively sleek app for both OS X and Windows which offers users a clean and simple interface composed of any and every Netflix video available, regional restrictions be damned. In fact, Smartflix even works in countries where Netflix isn’t even available yet.

While we usually hear about Netflix viewers in Europe being unable to watch certain programs, there’s an equally sizable reservoir of content which can only be accessed outside of the United States, with TV shows like Fargo and movies like Whiplash and Gone Girl being three prime examples.

Now before we show you what Smartflix is all about, we should make a point of noting that you should use this at your own risk as the app does run afoul of Netflix’s TOS. And while we sincerely doubt Netflix would ban individual accounts, a warning is nonetheless warranted.

For users interesting in checking it out, Smatflix offers a free 7-day trial after which the price rises to just $3.99 per month. An annual subscription, meanwhile, can be had for $39.90.

With all of the fine print out of the way, let’s dive in and take a look at why Smartflix is especially intriguing.

Once you download and install the app, you’ll be prompted to enter your Netflix credentials. Following that, simply fire up the app whereupon you’ll see a pretty straight forward user interface that has a similar look and feel to Netflix’s official site. But as you’ll soon see, the Smartflix UI is actually superior to what Netflix offers in a number of ways.

The magic of Smartflix becomes readily apparent when you start searching for otherwise restricted content. As a test, I searched for AMC’s Better Call Saul via Netflix’s website. As is evident below, the title is not currently available for streaming in the U.S.

It is however available in the U.K., and by extension, to Smartflix users.

What’s more, the Smartflix UI is actually much more user-friendly than the official Netflix site. With Smartflix, it’s incredibly easy to switch back and forth between TV shows and movies while seamlessly searching across any number of genres.

Even better, Smartflix has a section called “Expiring Soon” where users can browse through titles that aren’t long for the world of Netflix. It’s such an obvious and helpful design tweak, it’s a wonder why Netflix hasn’t implemented something similar on its own.

As another nice touch, if you hover over any particular title, you’re presented with corresponding Rotten Tomatoes and IMDB rankings, not to mention a brief summary of the targeted program. This makes drilling down through Netflix’s immense library a much more pleasant and less overwhelming experience. Again, it’s a wonder why Netflix hasn’t incorporated similar functionality on its own site.

As for how it works, the app description reads: “Smartflix is a simple application that combines an index of Netflix content available worldwide, an optimized proxy service and a chromeless web browser that embeds the Netflix web player.”

As a final point, we should note that some users raised security issues surrounding the Smartflix app on a Reddit thread, but as Extreamist points out,  “the app’s creator took the time to answer questions and speak directly to these concerns.”

That being said, if you use your Netflix credentials (username and password combo) for other sites online, it would probably be wise to avoid Smartflix.