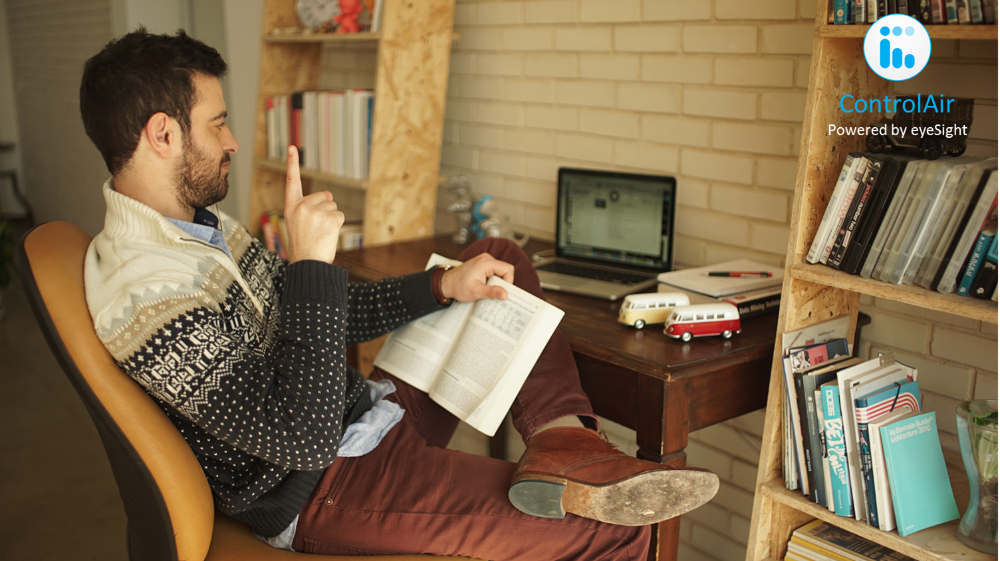 Available as a free download in the Mac App Store, ControlAir is a brand new OS X app that will let you control media on your OS X computer like never before. It uses the Mac’s camera to interpret a variety of gestures that can trigger certain actions inside a variety of apps.

FROM EARLIER: This terrifying iOS malware could infect your iPhone without a jailbreak

Essentially, the app follows your finger using the Mac’s camera, and then offers support for a variety of gestures. For example, moving a finger from left to right lets you play, pause, skip, rewind and change the volume in iTunes and other apps. The app can also be used to silence a Mac and resume playback with a simple gesture.

ControlAir currently works with iTunes, Spotify, Rdio, Netflix, QuickTime, VLC and Vox, though support for other apps should soon be available.

Developed by eyeSight, the app works on MacBook Air, MacBook Pro and iMac computers running OS X 10.9 or later, and gestures are recognized up to five feet away from the device. eyeSight has also provided touch-free interfaces to other companies, including Lenovo, Philips and Toshiba.

A video showing ControlAir in action and the company’s full press release follow below.

Use touch-free finger gestures to control iTunes, Spotify, Netflix, QuickTime and other music and video applications.

February 2, 2015 – ControlAir is launching to give Mac users touch-free control over their media and entertainment apps. With ControlAir, users can lean back and control music and video applications using air gestures, without touching their keyboard or mouse. The free app is available now for download in the Mac App Store.

ControlAir is simple to use, just raise your index finger in front of the Mac’s camera. Move your finger left or right to navigate between the play/pause, skip, rewind and volume controls. To select a function, air-click by lowering and raising your finger and mute by placing a finger to your lips in a “shush” motion.

“ControlAir offers a simple way to control your music and video applications,” said Gideon Shmuel, CEO of eyeSight. “Media apps are often running in the background and ControlAir keeps the control of those apps always accessible by simply raising a finger.”

ControlAir works with MacBook Air, MacBook Pro and iMac devices OS X 10.9 or later. The touch-free control is available up to 5 feet away from the device and works with iTunes, Spotify, Rdio, Netflix, QuickTime, VLC and Vox, with support for more media apps coming soon.

“With the help of our sensing technology, the way we control and consume media is evolving,” said Shmuel. “We created ControlAir with a fun and futuristic user interface to make your Mac’s media apps smarter and easier to use. ControlAir is about freedom at your fingertip.”

ControlAir is developed by eyeSight, the creators of singlecue and a leading provider of machine vision and gesture recognition solutions for digital devices. The company provides touch-free interfaces to OEMs such as Lenovo, Philips and Toshiba and has worked with a handful of developers to make touch-free applications.

eyeSight will be showcasing its latest touch-free technologies including ControlAir at Mobile World Congress from March 2 to 5 in Barcelona. Download ControlAir for free from the Mac App Store today. About eyeSight

eyeSight is an expert in machine vision, and gesture recognition technology, working with an array of technology companies such as AMD, Lenovo, Philips and Toshiba. eyeSight is the developer of singlecue, a device that allows users to connect and control media and smart devices with gestures, which was named a “Coolest Gadget of 2014” by CNN Money. Established in 2005 with the mission of bringing machine vision across connected devices, the company is dedicated to creating interactive experiences that are both simple and intuitive. Headquartered in Israel, eyeSight is led by an experienced team of image processing professionals who are pioneering the development of touch-free interfaces. For more information, visit http://www.eyesight-tech.com.