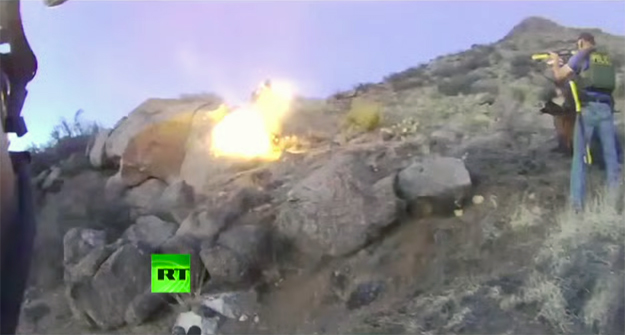 Following a number of widely publicised police incidents that were followed by public uproar, there is currently a hot debate surrounding the use of body cams by law enforcement. The general stance of people arguing for the use of body-mounted cameras by police officers is that if cops aren’t doing anything wrong, they shouldn’t have to worry about their actions being recorded.

Now, video footage recorded by body cameras is directly responsible for charges being filed against two Albuquerque, New Mexico police officers in the killing of a mentally ill homeless man.

Police officers Keith Sandy and Dominique Perez both now face murder charges in the 2014 killing of James Boyd, a 38-year-old homeless man known to be mentally ill. Boyd had allegedly been camping illegally at night in the Sandia Mountains outside Albuquerque when police approached him.

Video footage captured by body cameras worn by police officers on the scene show the culmination of an hours-long standoff between police and Boyd, who was threatening the officers while brandishing two knives.

In the video, which is embedded below, police can be seen throwing a flash-bang grenade that stunned Boyd when it landed at his feet. Boyd then appears to turn to run as officers approach him, at which point they begin firing non-lethal bean bag rounds from shotguns at his back.

Officers continue to fire rounds into Boyd’s back and buttocks as he lay motionless on the ground. When he continues to fail to respond, officers release a police dog that proceeds to maul the man’s leg.

It then becomes apparent as police approach the suspect that he suffered a serious head injury when his head made contact with a rock as he fell.

Boyd, who has a history of violent encounters with police, can be seen later in the video gasping for breath. He would ultimately die at the hospital later that day.

The full video, which contains sensitive material and may not be suitable for all viewers, follows below.