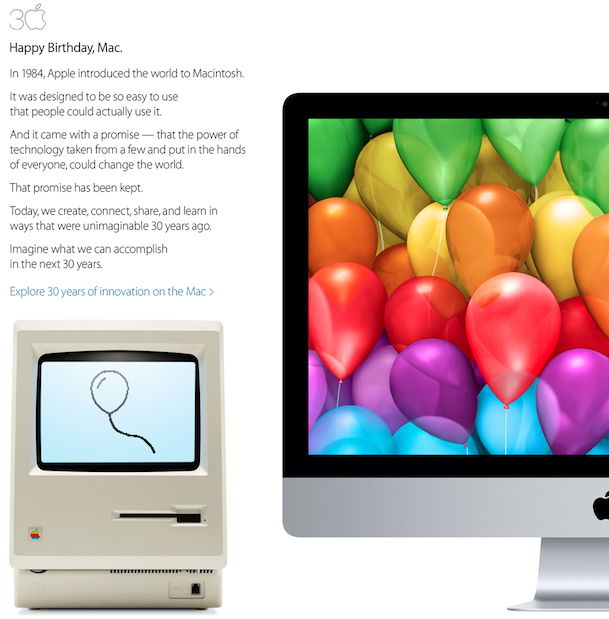 Apple on Friday hosted a special home page on its website and a short video on YouTube to celebrate 30 years of Mac innovation. On January 24, 1984, the Macintosh, its first computer was launched, “with the promise to put the creative power of technology in everyone’s hands.” The company has also created a special section on its website dedicated to the 30 years of Mac. A side scrolling menu lets users pick any year from 1984 to 2014 and further explore each period, which has its own page containing a story, relevant pictures, quotes from various personalities as well as a section that shows what people did with their Macs in each year.

Unsurprisingly, the first quote on the 1984’s Macintosh page belongs to Steve Jobs. “We’re just in the beginning stages of what will be a truly remarkable breakthrough for most people — as remarkable as the telephone,” Apple’s co-founder and iconic CEO said.

On the same special Mac section, current Mac users are encouraged to share the story of their first Mac purchase and what they’re using the computer for. “However you discovered the Mac, we’d love to hear about it.” Because your story is our story, Apple writes. “Add your experience to those of other Mac users around the world, and help chronicle where Mac has been and what it’s been up to for the past 30 years.” The company has a similar initiative for its iPad.

The following gif image compiled from Apple’s website by The Verge shows how users have been using the Mac from 1984 to 2014.