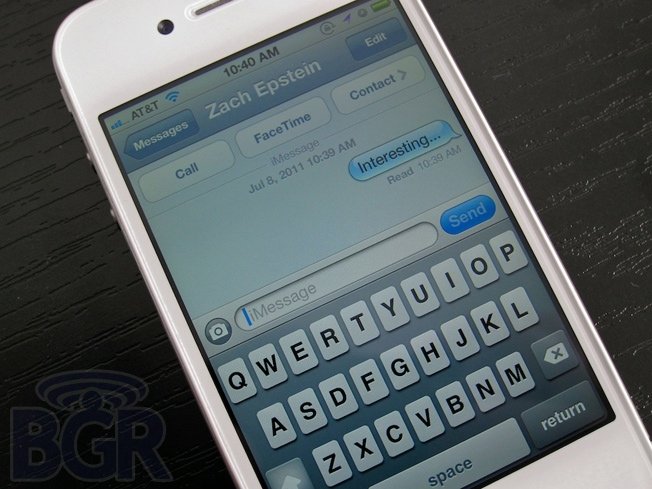 As mobile operators across the world seek ways to cope with SMS volume erosion, two leading messaging services are now running neck and neck with triple-digit annualized growth rates. Apple (AAPL) announced on Wednesday evening during its first-quarter earnings call that its iMessage service is transmitting more than 2 billion messages a day. It has now topped 450 billion cumulative messages. Last June, Apple announced it was sending 1 billion messages a day and had reached 150 billion cumulative messages. This translates to roughly doubling the daily message volume in six months while tripling the cumulative message volume. The exact pace is impossible to estimate thanks to Apple’s deliberate vagueness.

By comparison, WhatsApp hit 11 billion outbound messages on December 31st, 2012. This was up from 6 billion outbound messages WhatsApp reported on August 2012. WhatsApp has been enjoying torrid growth thanks to its cross-platform appeal; it is the leading messaging app across Android and iOS in dozens of countries. The December 31st number looks like a seasonal peak due to New Year ‘s Eve messages people exchanged. The improvement from 6 billion to 11 billion messages WhatsApp reported may therefore be inflating the actual annual growth rate.

The roughly 83% growth WhatsApp showed over a four-month period is close to the roughly 100% growth Apple just reported over a six-month period when you consider that WhatsApp picked an end point that was the heaviest messaging day of the year. WhatsApp’s growth rate seemed to have slowed down significantly at the end of 2012 after the big leap between October 2011 and August 2012.

It seems that Apple’s messaging volume growth pace is now close to what WhatsApp is delivering. WhatsApp is still delivering roughly 3 to 4 times as many messages as iMessage each day, depending on how big the New Year’s Eve boost was relative to a regular day.

This year will show whether Apple can leverage its tablet growth to start closing the message volume gap with WhatsApp. It’s a competition between a closed ecosystem and a cross-platform messaging app, but Apple’s edge in the tablet market may help level the playing field.[bgr-post-bug]