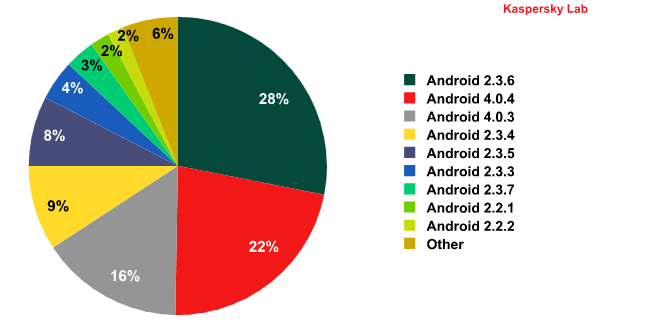 The latest numbers from Google (GOOG) reveal that Gingerbread was still the most widely used version of the Android platform as of October. The two-year old operating system is powering more than 50% of all Android devices in use and because of that, it is being targeted with malware more than any other mobile platform. According to a report from Kaspersky Lab, Android 2.3.6 Gingerbread accounted for 28% of all blocked malware attempts in the third quarter of 2012, while Ice Cream Sandwich accounted for 22% of blocked attempts.

The majority of attacks were carried out by exploiting Java vulnerabilities and more than 50% of all attacks were SMS Trojans that steal money from users by sending text messages to premium-rate services. Kaspersky notes that the overall number of mobile malware attacks have decreased, however, from nearly 15,000 attacks in the second quarter to 9,100 in the Q3. The drop of nearly 5,000 malicious files comes after three consecutive quarters with significant increases.