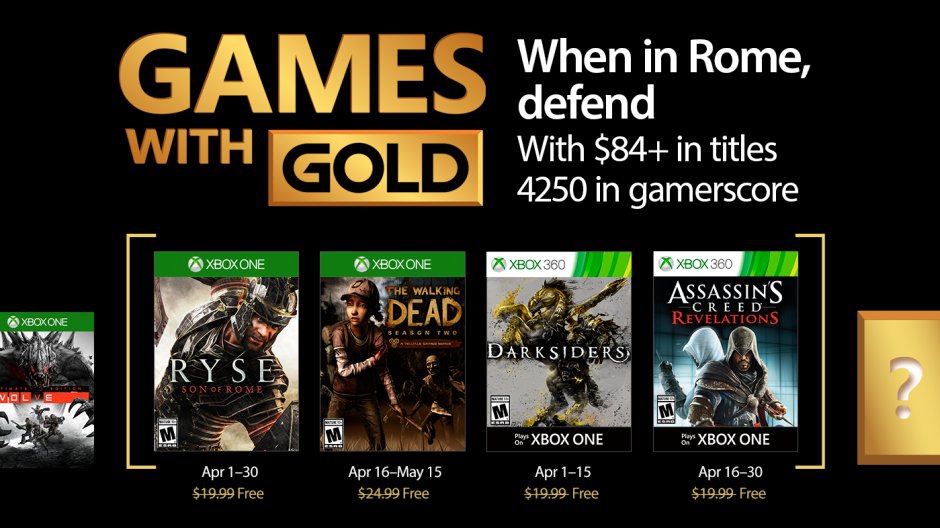 Microsoft might be struggling to keep up with the onslaught of exclusives that Sony has unleashed on the PlayStation 4 over the past few months, but that hasn’t stopped its Games with Gold lineup from improving immensely. In fact, the collection of games that Xbox One and Xbox 360 owners will be able to download for free in April is possibly the best selection that Microsoft has ever brought to the table.

For Xbox One owners, third-person action game (and Xbox One launch title) Ryse: Son of Rome will be free to download, as well as the second second of Telltale’s The Walking Dead adventure game. On Xbox 360, the violent, Zelda-like Darksiders will be free, alongside Assassin’s Creed Revelations.

Here are the details on the availability of the Xbox One and Xbox 360 Games with Gold for April:

You’ll be saving over $84 if you pick up all four of these games and can add up to 4250 points to your gamerscore. Also, keep in mind that each of the Xbox 360 titles are backward compatible with the Xbox One, so even if you don’t have an Xbox 360 on hand, you can still download all four games listed above.

You can check out footage of all four of April’s free Games with Gold in the video below: