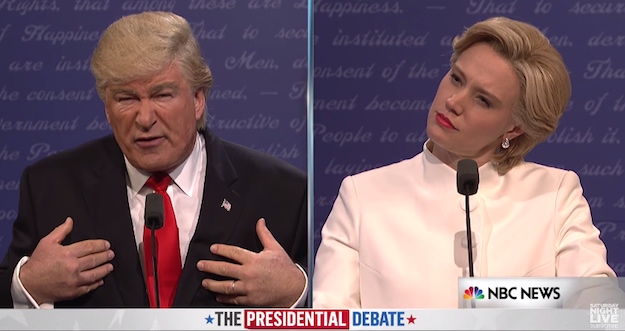 The trio of U.S. Presidential debates between Donald Trump and Hillary Clinton have been an absolute goldmine for comedians and late night talk show hosts. From the unlikely emergence of Ken Bone as a known entity to Donald Trump boldly proclaiming that nobody respects women more than he does, the debates have provided an incredible amount of source material for political satirists and journalists of all kinds.

Saturday Night Life in particular has been bringing its A-game with respect to the current election. In particular, the sketch show has been doing a tremendous job of skewering and spoofing the debates themselves, anchored of course by Kate McKinnon’s hilarious Hillary Clinton impersonation and Alec Baldwin’s surprisingly impressive job playing Trump.

DON’T MISS: Dunk test video shows the Google Pixel is more waterproof than you might think

Over the weekend, SNL was back it again, this time mocking last week’s third and final debate between Trump and Clinton. Also chipping in this time around was Tom Hanks who was back hosting Saturday Night Live for an impressive ninth time. With Hanks impersonating Chris Wallace, and McKinnon and Baldwin in top form, SNL’s cold open this past Saturday is must-see TV.

Starting off strong, McKinnon began the festivities with the following quip, “In the first debate, I set the table. In the second debate, I fired up the grill. And tonight, I feast.”

Per usual, the real debates between Trump and Clinton have been so outlandish and wacky that SNL doesn’t need to parody the debate so much it simply needs to recreate the bizarre reality that is the 2016 U.S. Presidential election.