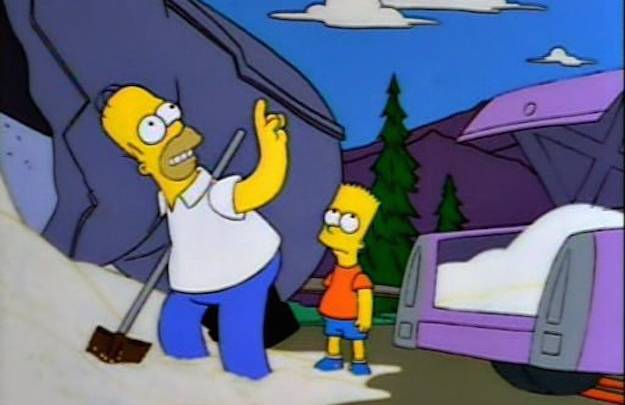 Back in the day, I used to fancy myself something of a Simpsons snob. Sure, lots of people loved and continue to love the show, but I was downright obsessed with it. Aside from watching multiple episodes a day, I also recorded dozens of episodes on VHS for later viewing. If you’re looking for a book with a an unrivaled laugh-per-minute ratio, you certainly won’t be able to do better than this Simpsons book, a bona fide classic as far as serious fans of the show are concerned. And when 20th Century Fox began releasing seasons of the show on DVD, I dutifully purchased each and every one, re-watched every episode, first without commentary and then again with the commentary.

Interestingly, though, if you take a look at my Simpsons DVD collection, it ends rather abruptly at season 8. Hardly a coincidence, the quality of humor following season 8 began trending downward. At first, the transition in humor was slight, though still noticable. Sure, there were still strong episodes to be enjoyed in seasons 9 and 10, but there was also a marked increase in the number of episodes that clearly — and frustratingly — lacked the type of wit and clever joke writing that defined the show’s earlier seasons. Before long, the show morphed into something completely unrecognizable from its former self.

So what in the world happened to The Simpsons? How did a show that engendered an army of fans manage to alienate its more passionate viewers? More specifically, why and how did the comedic sensibilities of the show undergo such a drastic transformation right around season 9? While it’s no secret that many of the show’s more veteran writers began leaving after season 5, the following video provides the best explanation I’ve ever seen as to why The Simpsons of today seems like a completely different show compared to its first few seasons.

The approach to this video is somewhat academic given that we’re talking about a cartoon, but old-school fans of the show will undoubtedly appreciate it. And who knows, perhaps more recent fans of the show will be inclined to go back and see the episodes that helped transform The Simpsons into a cultural institution with a comedic influence that literally reached all corners of the globe.