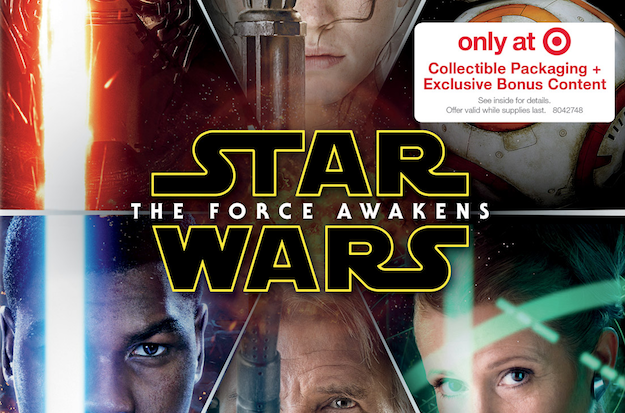 Disney finally announced on Thursday that Star Wars: The Force Awakens will be available to purchase on Blu-ray and DVD on April 5th and digitally on April 1st.

SEE ALSO: Amazon’s 13 best deals of the day (plus a great bonus deal)

If you want to preorder a physical copy of the movie right away, you have a few options. First, Disney is offering a Blu-ray combo pack from its digital store for $24.95 that comes bundled with a DVD copy of the movie as well as an exclusive lithograph set and $10 off a future online purchase of at least $40 from the Store.

Here’s what the lithographs look like, in case you’re curious:

Target is also offering its own exclusive package for $24.99, which comes with Blu-ray, DVD and digital versions of the film, unique collectible packaging and “20 minutes of exclusive bonus content, including a never-before-seen interview with Daisy Ridley and John Boyega, and a deeper look at the movie’s weaponry.”

Walmart and Best Buy will have exclusive packages as well, which you can read about on StarWars.com. Standard Blu-ray and DVD releases will hit store shelves on April 5th as well. Here’s a list of all the bonus features you’ll find on the disc:

Finally, here’s the trailer for the home release of The Force Awakens: