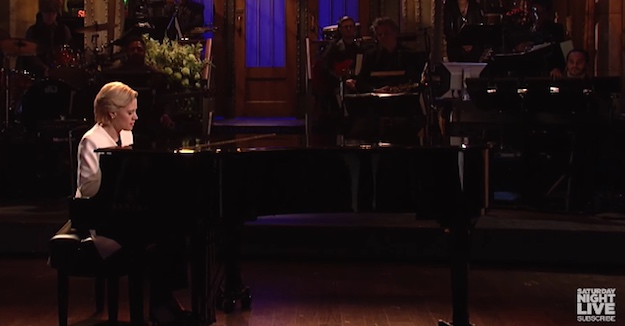 Following an emotionally charged week that saw Donald Trump surprise pollsters and political pundits by winning the 2016 U.S. presidential election, many were curious to see what Saturday Night Live would have to say about Trump’s ascension to the presidency.

SNL, after all, has been at the comedic forefront of this year’s election campaign, even bringing in Donald Trump to host the show last November. In recent weeks, SNL has delivered an endless stream of hilarious political spoofs and memorable debate parodies. Specifically, Alec Baldwin’s portrayal of Donald Trump and Kate McKinnon’s impersonation of Hillary Clinton both garnered rave reviews.

With the election now behind us, SNL fans were ostensibly primed for a cutting satirical take on Trump’s unlikely win, especially with word that Dave Chappelle would be taking up hosting duties. Surprisingly, though, SNL flipped the script and opted to do away with the funny and instead lead with an emotional cold open.

With Kate McKinnon dressed up in full Clinton attire, the multi-talented comedian took to the piano where she played a moving rendition of Leonard Cohen’s classic Hallelujah (Cohen had passed away earlier in the week). There were no jokes, no crafty one liners or anything of the sort. Just McKinnon and a piano.

Following the song, McKinnon looked into the camera and said, “I’m not giving up, and neither should you.”

You can check out the full video of SNL’s unusually somber cold open below.