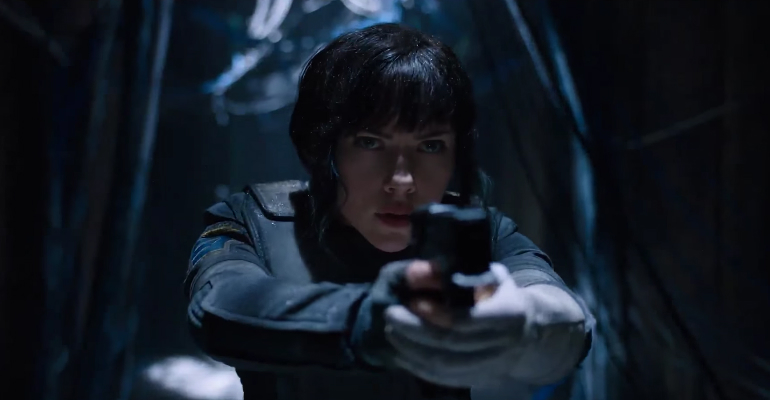 It’s Friday already, which means we got a bunch of new trailers to look at. Yes, there’s a Ghost in the Shell sneak peak you should see and a trailer for Passengers. But we’ve got a lot more than that, so let’s get started.

The first rule of Fist Fight… no, I’m doing this wrong. This isn’t that kind of a movie. It’s a comedy about school teachers going after each other. And when these teachers are Ice Cube and Charlie Day, we’ll want to show up. First Fight opens February 17.

Speaking of fights, do dudes break up? And when they do, is it because their friendship is peppered with Hangover-grade adventures? Flock of Dudes wants to answer thes questions next week when it launches. There’s a bunch of great comedians in this one, so jot it down somewhere.

This is the trailer we’ve been dying to see, and it’s not even a full trailer. It’s just the beginning. Ghost in the Shell stars Scarlett Johansson and launches on March 31st.

Some people have a hard time breaking up with their flock of dudes. Other have to break up with their punk rock past. Ordinary World tells that story. Perry, played by Billie Joe Armstrong has to adapt to a new world, life after rock. The movie comes out on October 14th.

if you loved Gravity, Interstellar, and The Martian, then you should be excited about Passenger. Starring Jennifer Lawrence and Chris Pratt, the movie is about a space expedition gone wrong. So the action is pretty much happening in space like in Gravity, and these people sort-of have to save Earth, like in Interstellar. And they’ll probably have to science the shit out of it to survive, just like The Martian. Oh, and there’s kissing and love. The movie is out December 21st.

Who’s up for one more Smurfs movie? Don’t roll your eyes, you secretly adore them, and there’s nothing wrong with that. The Lost Village comes out on April 7th. Here’s the first trailer.

Keanu Reeves is back playing a lawyer, and he may be, once again, the devil’s advocate. In The Whole Truth his character is working on acquitting a teenager accused of having killed his father, The movie comes out on October 21st, with Renée Zellweger also starring.

Trespass Against Us is an action-packed crime drama that tells the intricate story of an outlaw family, and the desire of a man to escape it. It’s got a spectacular cast, with Michael Fassbender playing the son of Brendan Gleeson’s character. Be on the lookout for it on November 24th.