It’s no secret that cord cutting continues to be a serious problem for cable providers. In fact, 2017 may be the worst year ever for cable providers as consumers increasingly turn to streaming services like Netflix and Hulu to get their entertainment fix. Case in point: AT&T just last quarter lost nearly 400,000 traditional cable subscribers.

Clearly, streaming services are growing in popularity, but Netflix in particular appears to be the top dog. For starters, Netflix’s subscriber base continues to grow by leaps and bounds. Just last week, the streaming giant noted that it added 5.3 million additional subscribers, bringing its cumulative total to 109 million. Second, a recent research report from Second Measure relays that Netflix subscribers tend to be more beholden to Netflix than other subscribers are to other streaming services.

Second Measure’s research found that consumers aren’t dropping Netflix in favor of competing sites like Hulu and HBO. If anything, Netflix appears to be a “must-have” service with competing sites being generally viewed as “add-ons.”

More good news for Netflix is that many online viewers are subscribing to Hulu in addition to—rather than in replacement of—Netflix. Hulu subscribers are significantly more likely than the general population to have a Netflix account, as 62% of Hulu members also have Netflix. This overlap suggests that, as options expand, subscribers will continue to view Netflix as the pillar of cord-cutter services.

As for some cold hard data, Recode took a look at Second Measure’s full report and relays that 80% of Netflix subscribers only use Netflix for streaming content. In stark contrast, 36.8% of Hulu subscribers also subscribe to other streaming services.

The following chart bodes well for Netflix, especially as it faces increased competition from all directions. 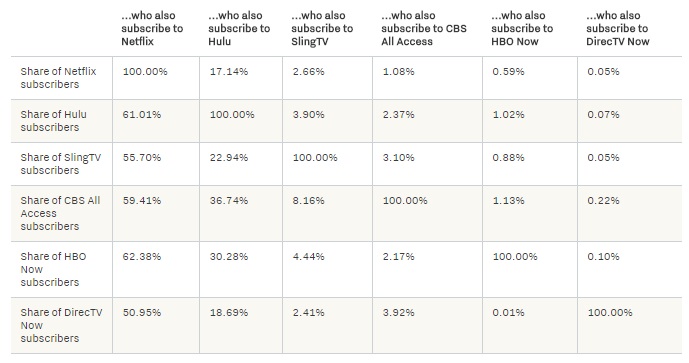