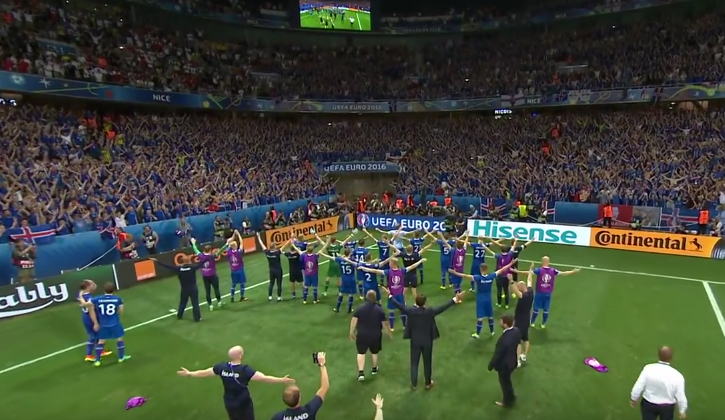 I’ve been following the Iceland football/soccer team even before it amazed fans at the UEFA Euro 2016 tournament, which is currently underway in France. Not too long ago, Iceland was one of the designated outsiders of the game. But in recent years the country invested heavily in football talent, and it all paid off soon enough. Iceland almost managed to qualify for the 2014 World Cup tournament, and then secured the ticket to Euro 2016, its first appearance at a major football tournament.

Even so, many ignored Iceland ahead of the tournament, thinking it would be easy prey at Euro 2016. But the team surprised everyone from the first game in group F, thanks to both its amazing gameplay as well as its great fans, who dominated stadiums with their thunderous Viking clap.

The better Iceland did in the tournament, the more clap videos we got to see on YouTube and social media, and the more we loved this underdog. The clap went viral, and we’ll forever associate it with this amazing Viking squad.

DON’T MISS: Verizon, America’s most expensive carrier, is about to get even more expensive

Iceland almost came out on top in a tough group, which it could have won with just a little luck. Two draws and a victory earned Iceland 5 points, and a second place in the group behind Hungary, which also won 5 points but scored more goals than Iceland. The Vikings outranked Portugal, the favorite of the group, which is an amazing feat for the tiny country. Here’s a clap after the last game in the group, a 2-1 win against Austria that was secured in the very last minute.

The real recognition that Iceland got was in the round of 16 when it sent England home. It all happened a few days after the Brexit vote, and the web was filled with Brexit jokes at the expense of the British team, forced to leave the tournament much earlier than anticipated. But the Viking clap (and adjoining howl), which effectively shuts down any chanting from the opposing team’s supporters and send chills down your spine, grew even stronger online. Here it is, as performed at the end of that game:

Iceland’s final game was against the host country on Sunday, in an amazing quarter-final matchup. France led 4-0 at half time – a surprising lead, considering Iceland’s previous performance. But the Vikings never gave up and tried their best to make a comeback. The game ended 5-2, and while France advanced to the semi-final where it’ll play against Germany, the web’s infatuation with Iceland was cemented. The clap again dominated the stadium, and the team became the Internet’s darling David, which had to face quite a few Goliaths before admitting defeat.

While the videos above show us this Icelandic thunder-clap “played” at the end of the game, here’s what happens during the game — the kind of cheering that’ll put a stop to the other’s side chants:

The Icelanders were received like true winners back at home, and for good reason. Everyone performed the clap, a video of which is already viral on Facebook, having racked up more than 9 million views already in less than a day.

Iceland is a team to watch if you love the game. And just as the haka belongs to New Zealand in rugby, Iceland will forever have the Viking clap.