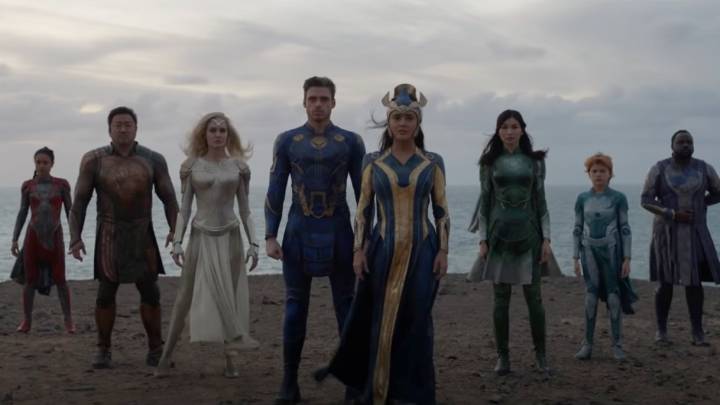 Marvel has four MCU movies scheduled to premiere this year, including Black Widow, Shang-Chi and the Legend of the Ten Rings, Eternals, and Spider-Man: No Way Home. Of those, the last two are easily the most exciting, considering all the leaks and rumors we have seen so far. In fact, Eternals might actually be the kind of superhero film that might get some attention at the Oscars. That’s because Eternals director Cholé Zhao won two Academy Awards earlier this year for Best Director and Best Picture, and was nominated for two other categories, including Best Adapted Screenplay and Best Film Editing. Add to that the fantastic ensemble cast for the film, and you end up with the perfect recipe for a spectacular superhero flick.

Marvel has finally released the first Eternals teaser trailer, showing us some of that filmmaking magic Zhao is expected to bring to the MCU. In the process, Marvel has finally addressed the massive elephant in the room involving the Avengers in the best possible way. Mind you, some spoilers might follow below.

The Eternals wouldn’t be the first team of largely unknown superheroes that Marvel introduces in the MCU. It happened with the Guardians a few years ago, and it was a wild success. The difference between these two groups is significant, however. The Guardians and Avengers were fighting Thanos at the same time in different parts of the universe before joining forces in Infinity War and Endgame. Meanwhile, the Eternals were on Earth all along. They’ve witnessed the Avengers’ rise because this race of beings with superhuman powers has been quietly protecting life on the planet for millennia.

The moment Marvel announced Eternals two years ago, we wondered how the studio would explain the fact that the Eternals chose to stay out of the public eye, even with imminent doom looming in the MCU. There must be a reasonable explanation, which is one reason why this film is so exciting. What made the Eternals stay in hiding, and why are they surfacing now?

The first Eternals footage we saw a few days ago did little to address these burning questions. But the first trailer already does a great job providing the foundation for the explanation long before the film’s premiere. As you’ll see in the clip at the end of this post, the Eternals have always stayed out of sight. “We have watched, and guided, we have helped them progress and seen them accomplish wonders,” Salma Hayek’s Ajak says of the human race on Earth, as the trailer shows the various time periods the film will touch on. “Throughout the years, we have never interfered, until now.” That simple statement is rather ominous. Something terrible is about to happen.

Just like that, Marvel told MCU fans who haven’t read the Eternals comics what the film is all about. Oh, and that strange-looking triangular Eternals ship that we saw in leaked Lego sets is very much the real deal.

But it gets even better during the trailer’s tag. The clip makes it clear to the audience that the Eternals follows Endgame, chronologically. Lia McHugh’s Sprite wonders who will lead the Avengers now that Captain Rogers and Iron Man are gone. “I could lead them,” Richard Madden’s Ikaris says, with all the other Eternals bursting into laughter.

Eternals is set to be released on November 5th, with the first teaser trailer available below: