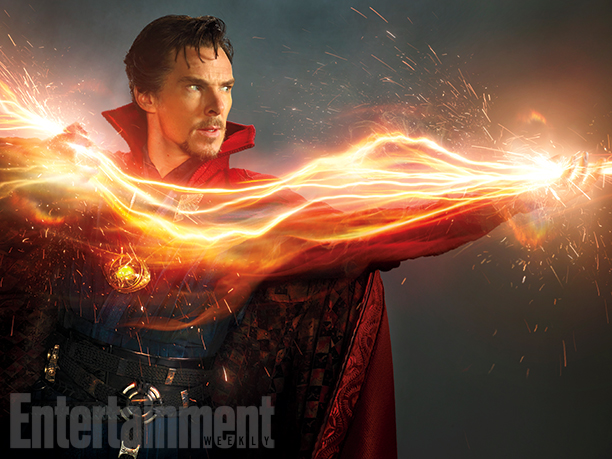 There are going to be plenty of Marvel films worth keeping tabs on over the next several years, but Doctor Strange is personally at the top of my list. And it’s not because Doctor Strange is one of my favorite Marvel characters, but rather because I know so little about him (aside from his involvement in the latest arc of the Avengers and New Avengers comics).

On Monday, we finally learned a bit more about the Sorcerer Supreme’s movie.

READ MORE: 4 burning questions I have after seeing ‘Star Wars: The Force Awakens’

In what has become an increasingly common phenomenon, we get our first official look at Benedict Cumberbatch as Doctor Strange via an Entertainment Weekly exclusive. In fact, the movie only began principal photography in November, which means that this was one of the first times Cumberbatch had ever donned the costume.

The actor said that he used the photo shoot as a chance to practice his spell casting as well:

“I’m still in the infancy of learning all that. It was like, okay, I’ve got to keep throwing these poses, these spells, these rune-casting things, everything he does physically. I’m thinking, there’s going to be a huge amount of speculation and intrigue over the positioning of that finger as opposed to it being there, or there. And I’m still working on that. We haven’t played any of those scenes yet. I felt really self-conscious. But, then, by the end, it was great. It’s like anything, you just have to experiment.”

EW was also able to reveal within its cover story that Hannibal’s Mads Mikkelsen will play the main villain in the film and that Rachel McAdams will be “a fellow surgeon that has a history with Strange and is his sort of lynchpin to his old life, once he steps into he role of a sorcerer,” according to producer Kevin Feige.

Check out some more art from the film below: