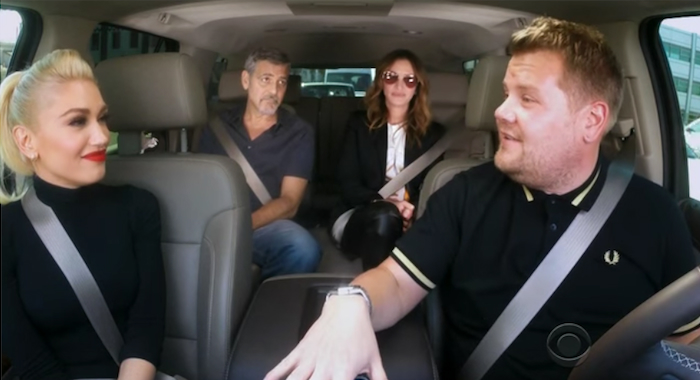 As if having Gwen Stefani star in one of James Corden’s Carpool Karaoke sessions isn’t fun enough, the team behind The Late Late Show decided to bring in George Clooney and Julia Roberts to crash the party.

Corden and Stefani get off to a hilarious and musical start, but things quickly take a turn for the worse when Corden realizes that he needs two more people in the minivan for getting to work in time on the HOV lane.

Corden then realizes that he knows someone who has nothing to do all day and could help out. Little does Stefani know that dude happens to be none other than George Clooney. The actor then calls a friend of his own who only agrees to join the party when she hears the singer is also in the car. Enter Julia Roberts.

Stefani doesn’t seem to be that surprised, but she’s probably used to meeting all sorts of celebrities all the time. Not to mention that all of Corden’s guests have new things to promote, which explains why they’re in the same car and TV show. Stefani’s new album This Is What The Truth Feels Like has just been released while Clooney and Roberts star in a new film, Money Monster.

The almost 15-minute clip is definitely hilarious and you should check it out. And yes, Clooney and Roberts do some singing of their own, but we won’t spoil all the surprises for you.