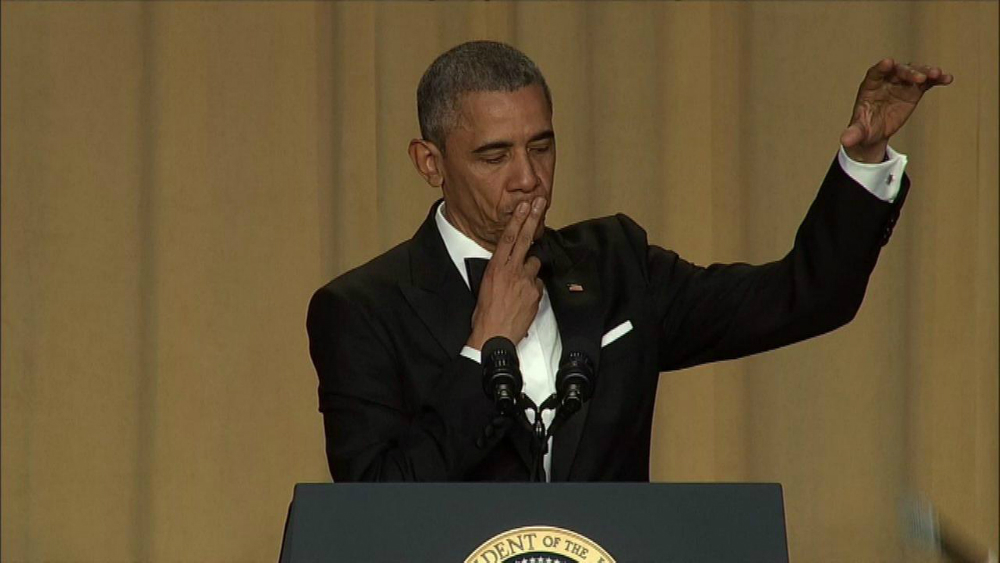 If there’s one thing to look forward to every year, regardless of whether you follow politics or favor the sitting president, that’s the Correspondents’ Dinner. That goes double for a president’s final event – and probably triple when Donald Trump as one of the main contenders to take over the oval office.

That said, President Barack Obama’s last Correspondents’ Dinner was a show to watch: We’ve got plenty of hilarious jokes and segments, we’ve got a good Trump roast, and there’s even a mic drop at the end.

Obama made fun of himself and the press in his lengthy speech, and explained how this presidency aged him, using Michelle as a comparison. Before he got to dissing Trump, he also made fun of Bernie Sanders and Hillary Clinton.

“Look, I’ve said how much I admire Hillary’s toughness, her smarts, her policy chops, her experience,” Obama continued, making fun of Hillary’s social game, and her appeal to young voters. “You’ve got admit it, though, Hillary trying appeal to young voters is a little bit like your relative who just signed up for Facebook. “‘Dear America, did you get my poke? Is it appearing on your wall? I’m not sure I’m using this right. Love, Aunt Hillary.’”

"With that, I have just two more words to say: Obama Out." —@POTUS #WHCD pic.twitter.com/RQSDh92YsU

He did mock the GOP and its current campaigns, which are “a little more loose.”

“Some candidates aren’t polling high enough to qualify for their own joke tonight,” he quipped.

“Ted had a tough week,” he continued. “He went to Indiana, Hoosier country, stood on a basketball court and called the hoop a basketball ring. What else is in his lexicon? Baseball sticks, football hats, but sure, I’m the foreign one.”

But he saved some of the best stuff for the Donald.

“You’ve got a room full of reporters, celebrities, cameras and he says no. Is this dinner too tacky for the Donald?” Obama asked, noting Trump’s absence from the event. “What could he possibly be doing instead? Is he at home, eating a Trump steak? Tweeting out insults to Angela Merkel? What’s he doing?”

“They say Donald lacks the foreign policy experience to be president. But, in fairness, he has spent years meeting with leaders from around the world: Miss Sweden, Miss Argentina, Miss Azerbaijan,” he continued. “And there’s one area where Donald’s experience could be invaluable and that in closing Guantanamo because Trump knows a thing or two about running waterfront properties into the ground.”

Hilariously, Obama ended his final Correspondent’s Dinner with a mic drop – see his full remarks and Larry Wilmore’s comments from the event in the videos embedded below.