With the iPhone 11 release scheduled for this Friday, images of the first iPhone 11 unboxing may have just leaked online. Of course, you may want to take this all with the requisite grain of salt, but it’s worth noting that unboxing photos of new iPhone devices do have a tendency to emerge online days before the official release.

With that qualification out of the way, it’s time to dive in. The device in question is a gold iPhone 11 Pro Max and the initial photos (via Genk) are rather stunning. To be fair, though, all new iPhones fresh out of the box look pretty solid, so this isn’t much of a surprise.

Per usual, Apple’s packaging is minimalist in nature, which is to say that you won’t find any superfluous packaging or extensive paper on the inside. The box itself features a picture of the device inside, in typical Apple fashion.

As evidenced below, what comes in the box is pretty standard, though the charger that comes with the iPhone 11 Pro models is of the 18W variety for much faster charging. Incidentally, the entry-level iPhone 11 still ships with a 5W charger.

Aside from that you’ve got a USB-C to Lightning cable and headphones.

As a point of reference, here’s what the iPhone 11 Pro Max looks like next to Samsung’s Galaxy Note10+. 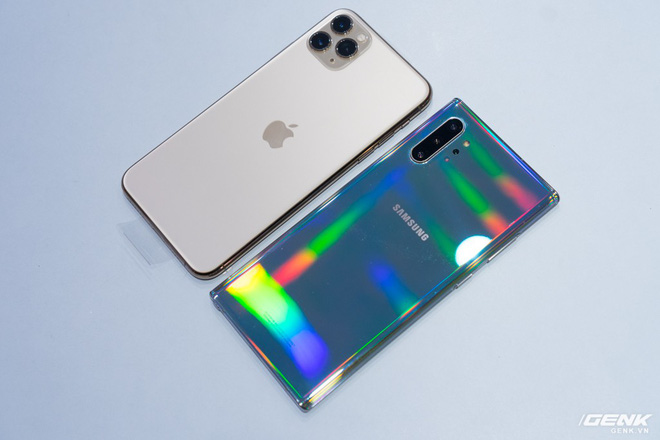 Again, unboxing photos always look stellar, so there’s not a whole lot to be gleaned from these photos. Indeed, the real points of interest will come once we start seeing photo comparisons involving the iPhone 11 Pro Max and premium Android flagships. Of particular interest will be Apple’s new Night Mode feature which purports to take incredible photos in low-light situations.

Of course, it’s no secret that Android devices like the Pixel 3 have boasted this capability for a while, so it will be interesting to see if the iPhone 11 Pro simply plays catch-up in this regard or will set an entirely new standard of excellence.