This past Friday, we told you that you had one last chance to take advantage of a killer deal that would get you Disney’s hotly-anticipated Disney+ streaming service for less than $4 per month. The service is set to launch in November just ahead of the holidays, and it will be priced normally at $6.99 per month. Truth be told, Disney’s upcoming new streaming service is still an incredible value at twice that amount, so $7 is a steal. You get unlimited access to hundreds and hundreds of hours of Disney content that can’t be streamed anywhere else, including Disney movies and shows, Pixar movies, and all the blockbuster films that Marvel Studios has released over the past decade. Beyond that, you’ll you get new original content that will only be available on Disney+, like The Mandalorian, a live-action Lady and the Tramp movie, a bunch of new Disney series, and tons of exclusive new series from Marvel Studios including WandaVision, Falcon and the Winter Soldier, What If…?, Loki and so much more.

With all that in mind, it seems pretty insane that Apple plans to charge $9.99 per month for its upcoming TV+ streaming service that will have almost no content at all when it launches. And the content it will have, like Dickenson and The Morning Show, looks decidedly “meh.” So it’s quite clear that Disney+ is a bargain at $6.99, but you can actually get in on the action for even less than that. Pay for a full year and it’ll cost you $69.99, or $5.83 per month — or you can hurry up and take advantage of an insane limited-time deal that slashes the price even lower. The catch is that there are literally only a few hours left to act if you want to take advantage of this killer deal.

We told you about an insane Disney+ deal last week and when we did, we basically broke the internet. So many people rushed to take advantage that it actually crashed Disney’s fan club website for a short while. Then we refreshed your memory on Friday and tons of our readers took advantage of this crazy deal.

Many people emailed us over the weekend to thank us for the heads up since this limited-time deal lets you subscribe to Disney+ for less than $4 each month. No, seriously… less than $4! We love hearing from happy readers, but something interesting popped up a bunch of times in those emails, and it’s fantastic news for people who might have missed the deal last week: It doesn’t take as long to get Disney’s special promo link as it did when we first told you about the deal. 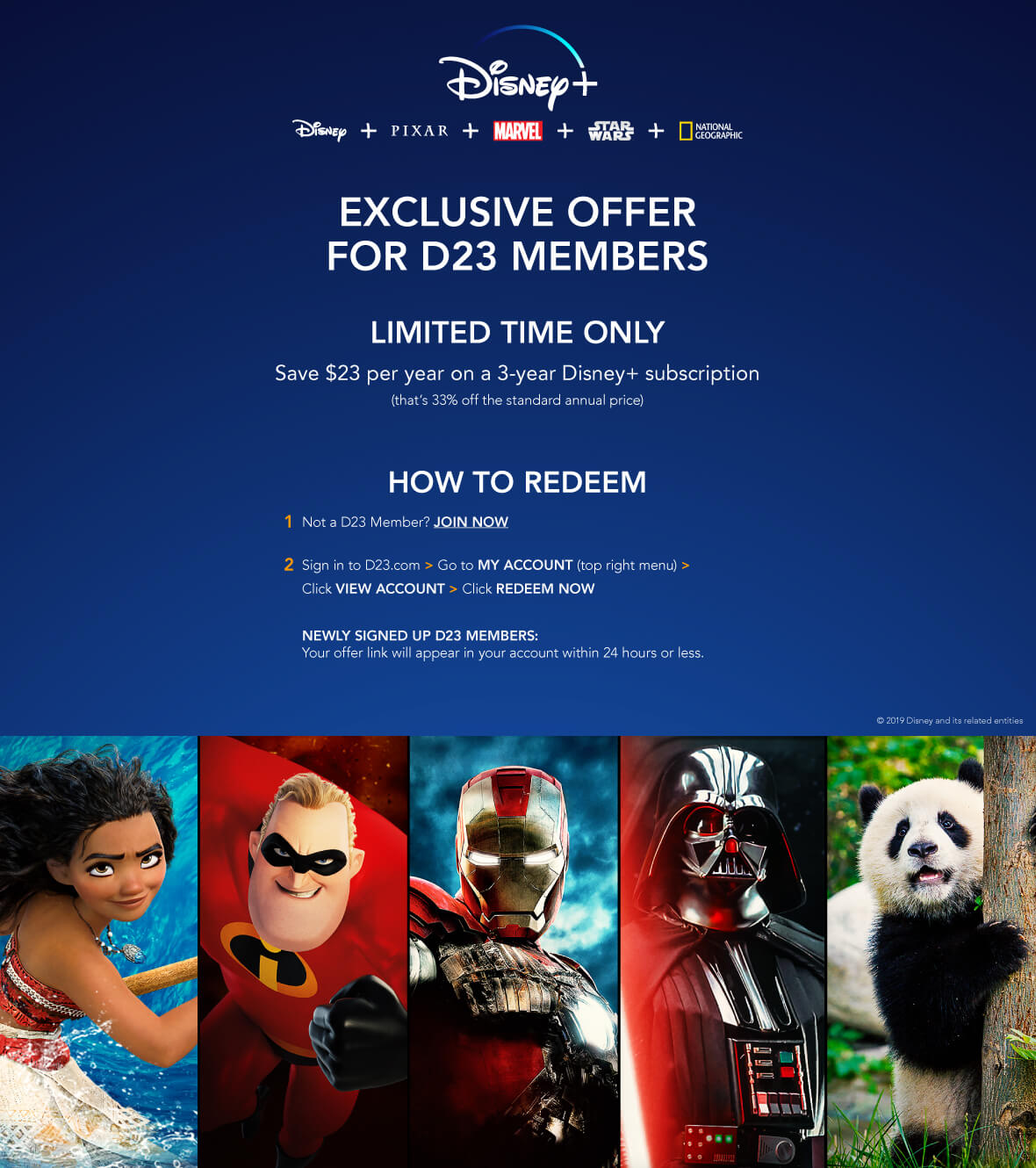 In order to get the deal described in the Disney graphic above, you have to sign up for membership to Disney’s “D23” fan club and then wait for a special link to appear on your account page. That link was initially taking up to three days to show up, which is why we posted a reminder about the deal on Friday. But according to several emails we received over the weekend thanking us for posting about the Disney+ promo, the link now appears for most new members within 8-12 hours. That means you still have a chance to get Disney+ at a deep discount before the promotion ends on Tuesday!

Here’s how it works: the deal is exclusive to D23 members, and there are a few different tiers of membership. Don’t worry, you won’t need to select a paid membership plan to get it because free D23 members have access as well. This special limited-time offer that’s available exclusively to D23 members lets you pay just $140 for 3 full years of access to Disney+ following its launch in November. Three years!

If you’re already a D23 member, you don’t have to wait at all to take advantage of this incredible promotion. Info can be found right here on Disney’s site, or just follow these instructions:

If you’re not already a member, you’ll have to sign up immediately — and we do mean IMMEDIATELY. The offer is only available through September 2nd and the “Redeem Now” link you’ll need in order to get the discounted rate will take at least 8 to 12 hours to appear on the page mentioned above. So what are you waiting for!? Go!!