Today at Apple’s highly-anticipated iPhone reveal event the company managed to take a bit of time away from talking about updates to its top-selling smartphone to give us a look at the next generation of the Apple Watch. Apple Watch Series 4 is the first actual redesign of the watch since its debut, and while it’s not a massive overhaul in terms of looks it’s still a significant upgrade over its predecessors.

The Apple Watch Series 3 was a big leap for the wearable line, finally adding a cellular option and fulfilling the promise of a standalone Apple smartwatch. With that taken care of — and several launches of the same Apple Watch design under its belt — Apple has finally updated its design with Series 4.

The new Apple Watch twins don’t come in the old “38mm, 42mm” size designations of their predecessors. This time around, the size options are 40mm and 44mm, and that means more screen real estate on your wrist. Since Apple’s watch measurements are taken from the top of the case to the bottom, these new sizes mean the watches are indeed physically larger than their predecessors, at least when looking at the device straight-on. 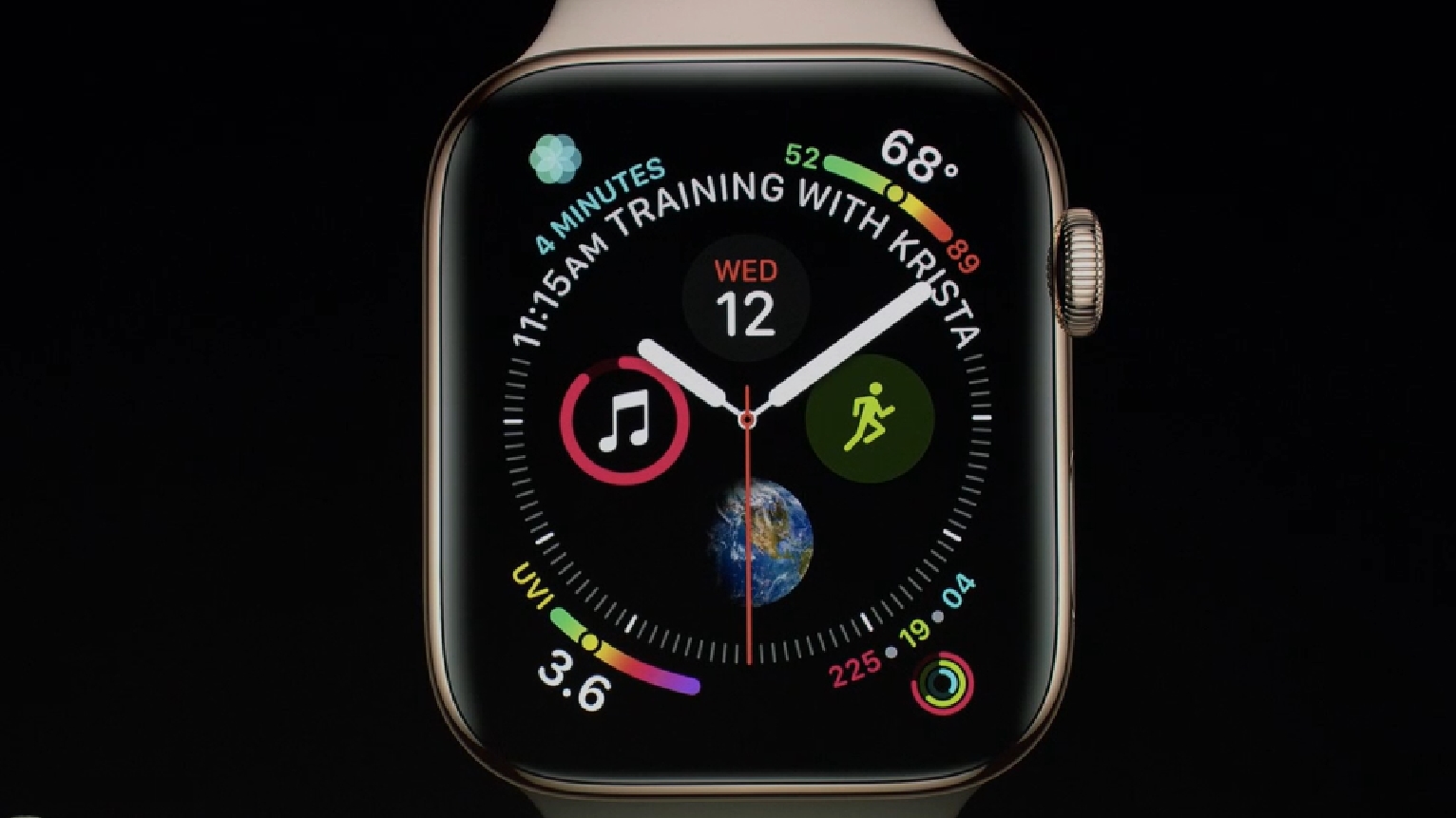 The new screens are 32% and 35% larger than the previous versions, which means more space for complications and additional breathing room for apps. That’s obviously great news if you find yourself mis-tapping your wrist from time to time.

If an overall larger watch doesn’t sound like a selling point for you, you’ll be happy to hear that along with the increase in screen size the Watch has actually gotten slimmer. The Series 4 is thinner than the previous versions. There’s no denying that the Apple Watch has always been a bit, well, thick, so if that was something that turned you off about the Watch up until now, you might have a reason to reconsider.

On the backside, new black ceramic surrounds the sensor, which Apple says helps the watch retain a stronger wireless connection. Inside, a new 64-bit dual-core processor delivers up to twice the performance of the previous models. New accelerometers and gyroscopes improve the accuracy of the watch’s motion detection. This also allows the watch to detect accidental falls, and when it notices what might have been a serious accident it’ll aid you in getting help. 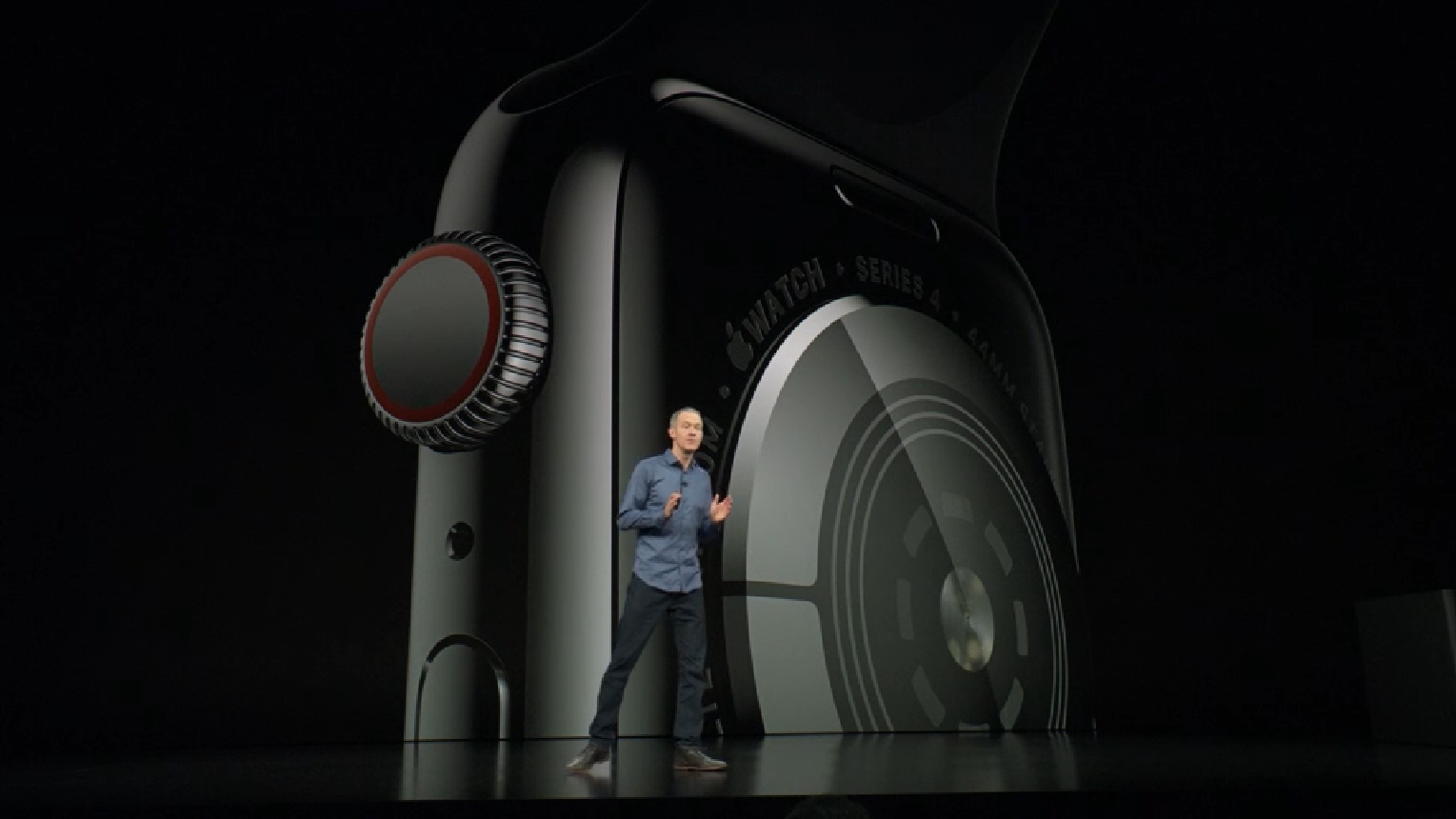 Would-be Series 3 buyers who decided to sit out for this most recent round of upgrades due to the obnoxious red dot on the crown will also be pleased to note that Apple has done away with that design choice… sort of. Gone is the flat red sphere and in its place is a thin red circle on the watch crown. It’s a small change but it’s obvious that Apple took the complaints to heart and tweaked it.

Speaking of heart, the new Apple Watch has a trio of new heart-tracking features that can alert you if your heart rate is dangerously low or has an irregular rhythm. Those are handled by the heart rate sensor, but an all-new sensor also allows the watch to give you an ECG, which it uses to warn you of various heart conditions you might not even know you have. Just stick your finger on the digital crown and the watch can deliver a report 30 seconds later. 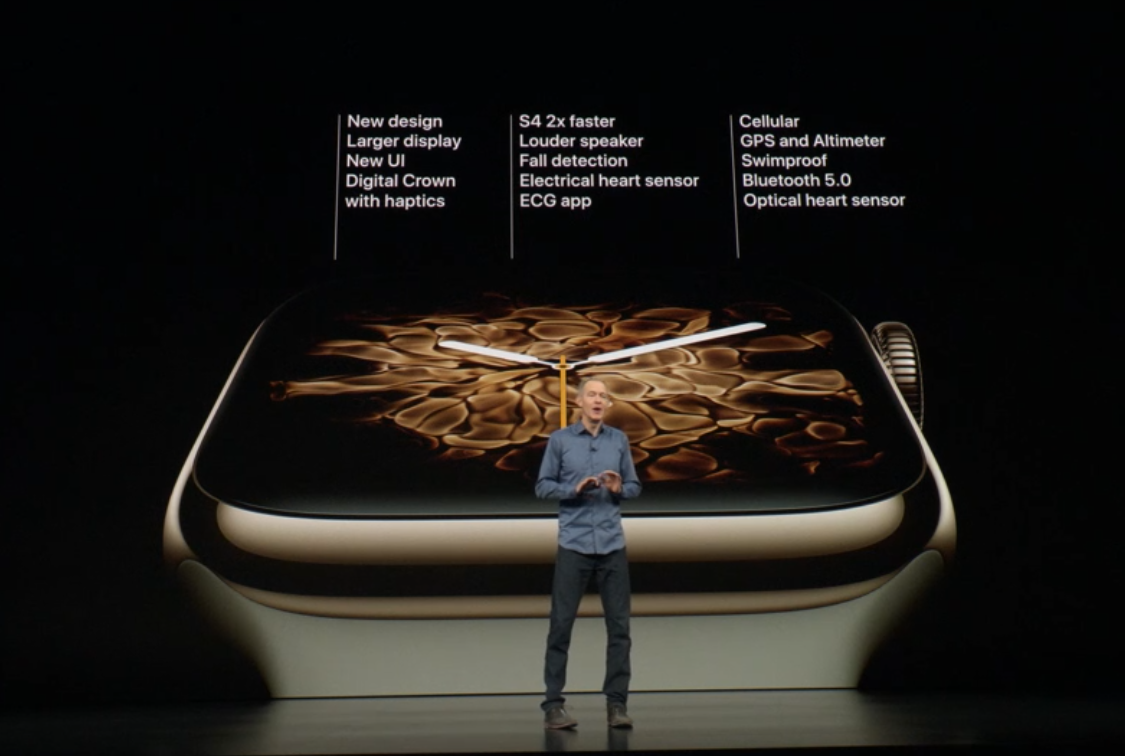 With the new, larger displays, Apple is introducing a bunch of new watch faces to take full advantage of it. There’s new faces with water, fire, and vapor effects that really pop on the new screen, so that’s neat.

The watches will come in both aluminum and stainless steel. The aluminum models will be offered in silver, space gray, and gold, while the stainless steel variants come in polished, gold, and space gray. As for pricing, the new Apple Watch Series 4 variants come in at familiar price points. The GPS models start at $399 while the cellular versions start at $499. The watches will be available on September 21st, with orders opening September 14th.