2017 has seen plenty of trends, but one that seems to actually be sticking is the smart home. I’m not talking about Wi-Fi-connected kettles or Bluetooth water bottles; those are dumb, but believe it or not, there’s a handful of smart home devices that are actually good.

Unfortunately for avocado-eating millenials, the bulk of smart home devices still require some kind of modification your landlord won’t be wild about. A door lock with no key might jazz up your walk-up, but it probably violates about 20 rules in your lease. The same thing goes for doorbells that need wiring, showerheads that require holes in the wall, or speaker systems with miles of wire running everywhere.

Instead, this is a list of the best smart home gadgets I’ve tested that require no wiring, no holes, and nothing more than a screwdriver and an ability to read to install.

Easily my favorite smart-home gadget is also the newest: August’s new Smart Lock Pro, which is paired with the Connect hub and a Bluetooth PIN pad for the ultimate lock system. August’s Pro model doesn’t require you to replace the existing deadbolt; instead, you unscrew the back plate and thumb latch, and put August’s lock over the top. Think of it as a mechanical hand that can lock or unlock the door at will. Most importantly, the front side of the lock is completely unmodified, and you (or your landlord) can still use a physical key to get in.

Installation is a breeze, provided your lock is compatible. It took about ten minutes (without instructions!) for me to get the lock installed. Once that’s in place, basic functionality is established: You can lock and unlock the door using the August app, and the door will auto-unlock when the app senses you coming home.

You can (and should) also add the August Connect, a bridge device that looks a lot like a night-light. You plug it into an outlet near-ish to the door, and it takes the Bluetooth communications from the lock and communicates with the internet over Wi-Fi. It means you can get notifications whenever your door is opened, or operate the lock from anywhere in the world.

If you don’t want to be a slave to your phone, however, I thoroughly recommend also getting August’s Smart Keypad. It’s a small battery-powered keypad that sticks onto the wall right outside your door, and lets you (or a guest) lock and unlock the door without a phone or keys.

The best part is that each user gets their own unique code, so you can keep track of who’s coming and going. You can also generate one-time codes to let someone into your house on an odd occasion, or time-sensitive codes, say for a dog-walker who only comes between 12 and 2 every day.

There are some downsides: the full kit is expensive ($250 for the Smart Lock Pro and Connect bridge, plus another $80 for the keypad), the lock itself is bigger than I’d anticipated and stands out, and the batteries need changing every few months.

Overall, I’ve loved the experience: it’s great to never have to carry keys, I can give visitors access without worrying about spares, and it functions as a basic security system for my apartment, since the front door is physically the only way in or out. 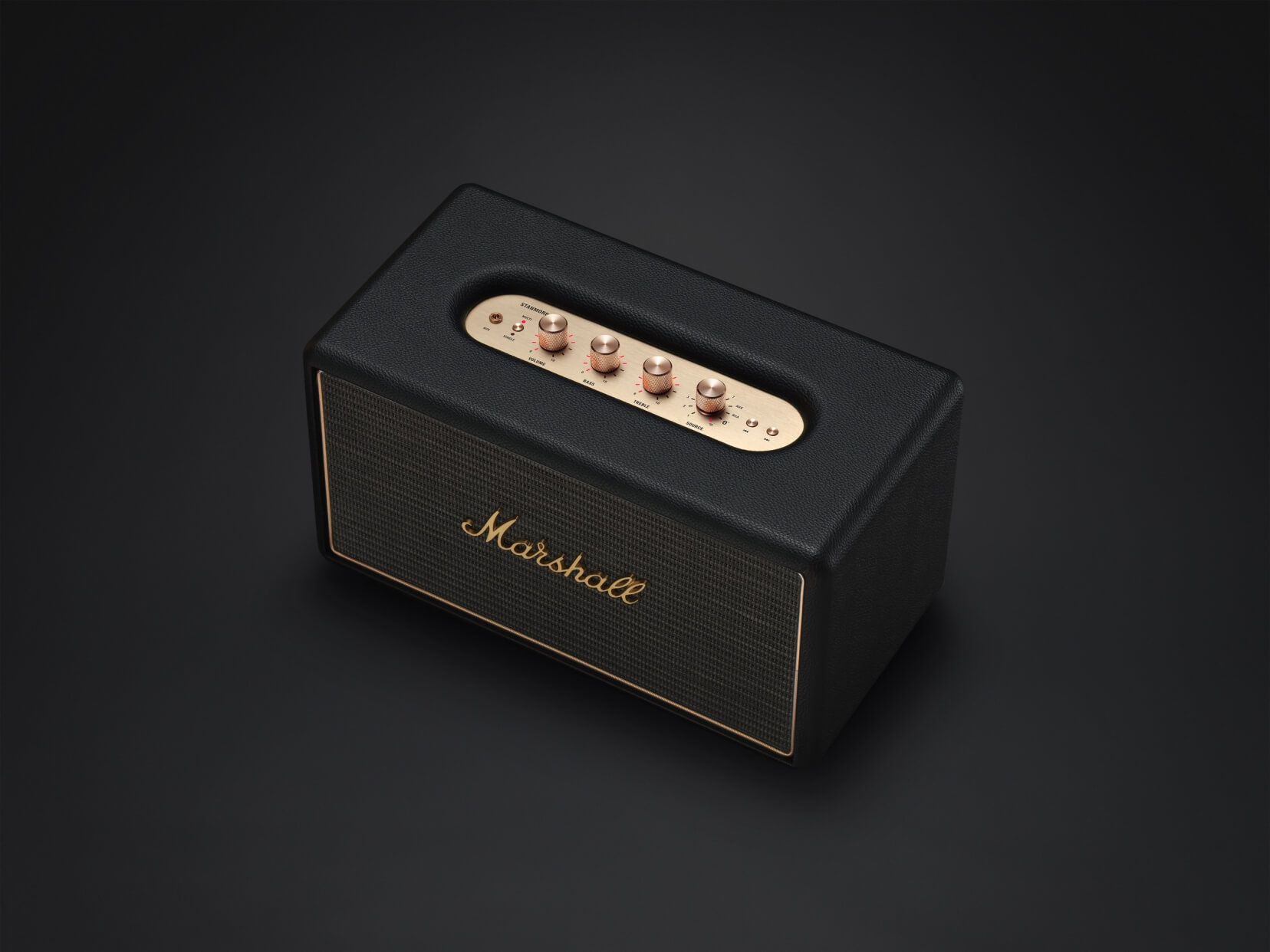 Speakers were one of the first home gadgets to get connected, and with good reason: music streaming services are all online now, and it’s much more convenient to stream from your stereo than it is to leave your phone plugged in with a wire.

Dongles like the Google Chromecast Audio are a good way to retrofit an existing stereo system with Wi-Fi casting powers, but a sleeker solution — especially when space is tight — is an all-in-one connected speaker. If you just want one single speaker to fill your apartment with sound (rather than a multi-room system) Marshall’s new line of connected speakers are an excellent option.

The Stanmore resembles Marshall’s classic guitar amp, but the internals are much more sophisticated. It’s Wi-Fi connected, with support for AirPlay, Spotify Connect, Google Cast; there’s also Bluetooth, a 3.5mm jack input, and stereo RCA input. Short of pro-level XLR hookup, I can’t think of any speaker with more connectivity options. I also love that Marshall kept the physical buttons, including a series of knobs for adjusting volume, input, and sound.

Speaking of sound: the Stanmore is exactly as good as you’d expect from a $450 speaker. The bass is sufficient — it’s not going to rival something with a built-in sub — and the highs and mids are warm and precise. The speaker fills a good-sized living room well, and it could stretch to working as the music center for an apartment party, although that’s obviously not the first intention. If you’re upgrading from a portable Bluetooth speaker to something more suited for apartment dwelling, this should be perfect.

Although the Stanmore is compatible with multiple-speaker setups, I think you’d be better off with one of the established systems like Raumfeld or Sonos if you’re planning on buying into a whole system. Not only are the UIs better, but both companies have a long and established track record with keeping up to date on the latest services and music streaming platforms.

If you want smart lighting, the best choice is the most well-known: Philips Hue. Most companies’ smart bulbs are priced around the same, but Philips’ system has been around for so long, it’s the obvious winner. The lights are compatible with a wide range of services like Google Home and Alexa, and there’s a truly ridiculous number of light bulbs, light strips, and table lamps that all work together.

I’ve got a handful of color bulbs, around 10 white bulbs, and a few light strips in my setup. The color bulbs work well in a central setting, like over a kitchen island, to add mood lighting to a room. The light strips sit well behind a TV or computer screen, and do the same job of adding ambience. You can also set the lights up to flash red when your sports team scores, which makes the $500 I’ve sunk into smart bulbs seem strangely worthwhile.

The most underrated aspect of smart lighting, though, is using the cheaper white-only bulbs in table lamps or on bedside tables where you might not have a wall switch. Rather than re-wiring a room so that the top outlets of a receptacle are controlled by a switch (not something you can do in an apartment!), you can put Hue bulbs in the lights, and then buy a cheap Hue remote to control them. It also means you can turn the bedroom lights off without getting out of bed, which, again, makes the whole system worthwhile.

I also find that smart lights are the best thing to pair with voice control. I recently added a Google Home Mini to my setup, and it works best for controlling my Hue lights. Thanks to a couple of shortcuts, I can set the living room lights to a particular color, or just turn everything out on my way out the door, which is much faster and more efficient that wrestling with an app.

My final favorite smart-home gadget isn’t new, and it’s also not particularly smart, unless you count anything with a Bluetooth radio as part of the Internet of Things. But none of that matters, because what the BedJet does (and does rather well) is pre-heat your bed to a toasty 107 Fahrenheit before you ever come near it.

The concept is simple: BedJet has a fan, a heating element, and a tube that leads under your sheets (or into the middle of a special hollow top-sheet that BedJet also sells). You control it with a smartphone app or a remote control, and it can either blow hot air into the bed, or just run the fan for cooling.

The benefits as an alternative to an electric blanket (or running a heating fan next to your bed) are obvious, and it works just as well as you’d imagine. The hidden secret is that it also blows cool air without the heating element, working like the world’s best (and most silent) fan to keep you cool.

For someone in an old apartment with inconsistent heating or not A/C, the BedJet’s price makes total sense. It’s as cheap as a bad window A/C unit, but costs far less to run and isn’t nearly as noisy. The fact that it’s a cinch to set up or move doesn’t hurt, either.

Tweet
Verizon hits back at T-Mobile over 5G claims