Before the solar eclipse earlier this year, scientists had one warning: Don’t stare directly at a partial eclipse, or the sun will scortch your retinas. The advice made sense — after all, the sun is a giant radiation-emitting ball of burning gas — but the warnings lacked the kind of finger-wagging pictures the dentist uses to teach small kids to brush.

Well, not any more. Thanks to the noble sacrifice of a 20-something woman who stared at the partial eclipse, we know exactly what happens if your eyeballs fly too close to the sun.

According to a paper published in JAMA Ophthalmology, the woman presented herself at the New York Eye and Ear Infirmary of Mount Sinai Icahn School of Medicine three days after the eclipse:

During the solar eclipse of August 21, 2017, a woman in her 20s viewed the solar rim several times for approximately 6 seconds without protective glasses and then again for approximately 15 to 20 seconds with a pair of eclipse glasses (unknown manufacturer). She reports looking at the eclipse with both eyes open. The peak obscuration of the sun’s area by the moon was approximately 70%.4Four hours later, she noted blurred vision, metamorphopsia, and color distortion, which were worse in her left eye. She also reported seeing a central black spot in the left eye.

The doctors used a series of imaging techniques to observe the damage to her eye at a cellular level. What they found is that her eye had been damaged in a precise crescent shape that matched the semi-visible sun she’d been staring at. 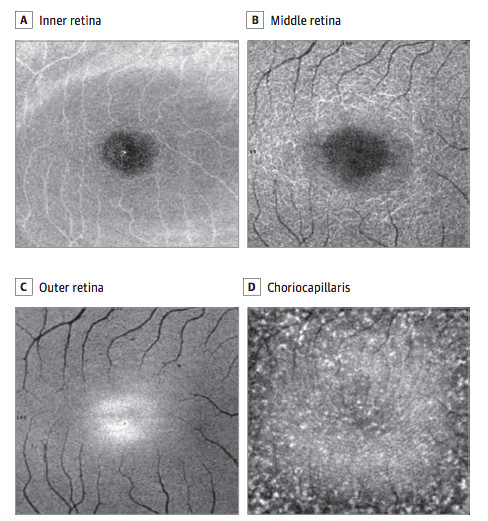 No cure currently exists for severe damage caused by looking at the sun. The last the doctors treating the case heard, the woman in question hadn’t recovered her full normal vision.