The definitive guide to watching NFL football without cable

Anyone who’s tried cutting the cord knows that watching live sports is the hardest thing to do without cable. Even getting every game with cable is challenging, so it’s no surprise that the best cable alternatives still struggle with live sports.

We’ll be brutally honest first: If you live out-of-market, watching all the NFL games for your favorite team is going to be hard work. You have to contend with regional blackouts, local vs national broadcasts, and special legal provisions that have been carved out for the NFL. But with a little perseverance, most everything is possible.

Before we get into the pros and cons of different streaming services, you first have to understand what you’re up against when it comes to getting every game.

Monday, Thursday, and Sunday Night Football are all what they call “national broadcasts.” This means that no matter where you live, you will be watching the same game, at the same time as someone living in a different time zone.

Then you have Sunday Football, and this is where things can get a bit confusing. Sunday Football is regionally broadcasted and will typically consist of 11 games all taking place over a 7-8 hour time period. Because there are so many games going on at the same time, the networks are forced to divvy up the games based on location.

The key match-ups will often air on Thursday, Sunday, or Monday Night for national broadcast, while the rest air on Sunday afternoons on either CBS or FOX.

As far as which individual game airs, that will be dependent on the area. If a city falls within 75 miles of an NFL team’s stadium, or if you can pick up a broadcaster within that range, you fall into the local market and will get (at the very least) every single away game that the team plays. You’ll also most likely get home games as well, but that’s dependent on blackout rules, which I will get to further down.

A great example of this can be found in Harrisburg, Pennsylvania, a secondary market for the Baltimore Ravens and a town that finds itself split between the Steelers and Ravens fans. Whenever the Steelers happen to be playing at the same time as a Ravens home game, broadcasters will often air the Steelers instead. Of course, this enrages Ravens fans across the region.

From here on it gets a bit difficult to determine broadcasts schedules, as it is based on a mix of proximity to other NFL teams, local broadcast deals, and popularity. Once you get down to this level, there’s not much “science” behind it and it is best to look at every game on a case-by-case basis. 506Sports.com is a good resource that provides weekly broadcast maps on Thursday so you can see exactly which games air in which regions.

Here is an example of a weekly map it provides: 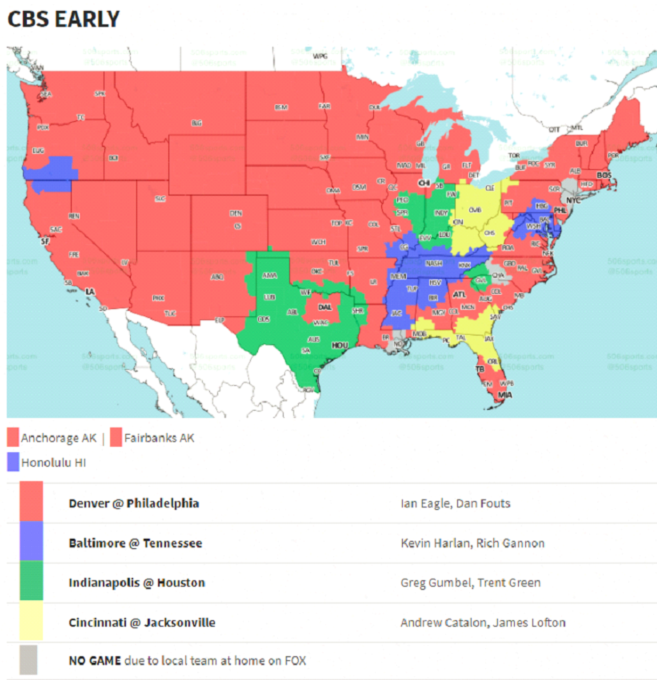 Pair this with a simple NFL TV schedule and you can see exactly what will air, when and where.

How do Blackouts Work?

For the NFL, local games are blocked from airing in their local market if the home team has not sold out tickets within 72 hours of the game. This is done in a dubious attempt to get more people to come out and watch the game in person, but it rarely works.

The Sports Broadcasting Act of 1961 is what makes sports blackouts legally possible. The law allows for sports leagues to pool team resources in order to negotiate better broadcasting deals, which includes blackout rules.

To watch football without signing up for a bloated cable tv subscription you will need a streaming service subscription and or an OTA (over-the-air) Antenna.

An OTA antenna provides access to major broadcast networks for free and in HD. These networks are broadcast by your local TV station and include channels such as FOX, CBS, NBC, ABC and many more. The good news for cordcutting NFL fans is that any game that airs on these networks can be enjoyed for free, in HD, with the one-time purchase of a TV antenna. Obviously, buying an antenna will only get you locally broadcast games from certain channels. It’s a good solution for a casual fan, but rarely works for someone who wants to fanatically follow every game.

To stream NFL Football you will need to choose the service that best meets your needs. For most people, it is not all about football, so you will need to do your homework and figure out the tools and services that meet most of your needs. I say most because you may also need to compromise a bit. Saving money is not a given, it takes a bit of flexibility too.

Some of these choices offer one or two of the channels you need, whereas others offer everything you need, but don’t offer live coverage. The most popular options include NFL Game Pass, Sling TV, DirecTV Now and Amazon Prime.

Kill The Cable Bill, a popular cordcutting website, has this matrix of popular streaming services and what NFL broadcast channels they get you:

All of the options listed do have one major downside: they still adhere to regional broadcasts and blackouts. Providers generally use IP tracking on desktops, or the location services on mobile, to determine your location and tailor the channels specifically.

There are ways around this — like using VPN to trick the provider into thinking you’re in Atlanta, rather than Florida — but they technically violate the terms of service, and aren’t guaranteed to work. Using a VPN is simple if you’re streaming off a desktop computer or laptop, but it’s far harder if you want to use a set-top box or streaming stick to show the game on your TV.

All the different streaming services tend to work across a common core of devices, but after that, you’ll need to examine what hardware you have, and how you want to watch the game. For example, Amazon Prime video doesn’t work on Chromecast, and Hulu doesn’t support the Playstation. In general, I would strongly suggest using a streaming stick or set-top box rather than a TV’s built-in apps, as they get updates far faster, and are compatible with a wider range of streaming services.

These days, it’s also worth checking to see if your mobile provider gives you a discount on a streaming TV service while you’re signing up. AT&T Unlimited customers, for example, can get DirecTV Now for $10 a month, and Verizon subscribers get NFL Mobile through their subscription.

Finally, it’s worth talking about NFL Redzone and NFL Sunday Ticket. RedZone is a special channel that only works on Sundays from 1PM to 8PM Eastern, and offers “whip-around” coverage of all the games going on Sunday afternoon. Rather than showing a conventional broadcast, it cuts between games to show all the highlights. It’s a good option for keeping an eye on several games — and it beats getting no coverage at all — but it doesn’t come close to being the same as watching the entire game.

NFL Sunday Ticket should be the perfect way to watch NFL sports. It broadcasts all the regional Sunday afternoon games from FOX and CBS, even if you’re out-of-market. Unfortunately, there’s a huge caveat: it’s exclusive to AT&T’s DirecTV satellite TV subsidiary. You need a subscription to DirecTV to watch, which is even more expensive than a regular cable package.

Now, some people might be in luck. In markets where DirecTV isn’t available, AT&T offers a streaming version. It’s expensive — $70 for two months — but it does guarantee you the ability to watch every single game, regardless of location. You’ll have to go to AT&T’s website to see if you’re eligible for streaming; in general, anyone who lives in an apartment, condo, or the middle of a city where it’s not feasible to put a satellite will be eligible.