Amazon’s new Echo Show will finally be released next week, and it looks like a pretty terrific device. It does everything the Echo can do, but it also has a screen for video calling and more. At $230, however, it’s a pricey proposition for many potential users. In fact, it’s still pretty pricey with Amazon’s current deal, which shaves $100 off if you buy two Echo Show units and use the code SHOW2PACK at checkout. Guess what: there’s another Alexa-enabled video calling device out there, and it was around long before Amazon ever announced the Echo Show. Check out the Nucleus Anywhere Intercom with Amazon Alexa, which is discounted right now on Amazon. 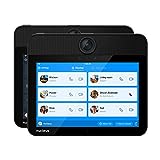 Tags: BGR Deals
Think of all the amazing things you can do with Philips’ Alexa-enabled Hue Lightstrips

At just $29 for 4K and HDR, there’s nothing else like this Roku Premiere deal

There are plenty of Apple Watch accessories, but this $19 gadget is the only one you definitely need