‘Guardians of the Galaxy Vol. 2’: Explaining all 5 post-credits scenes 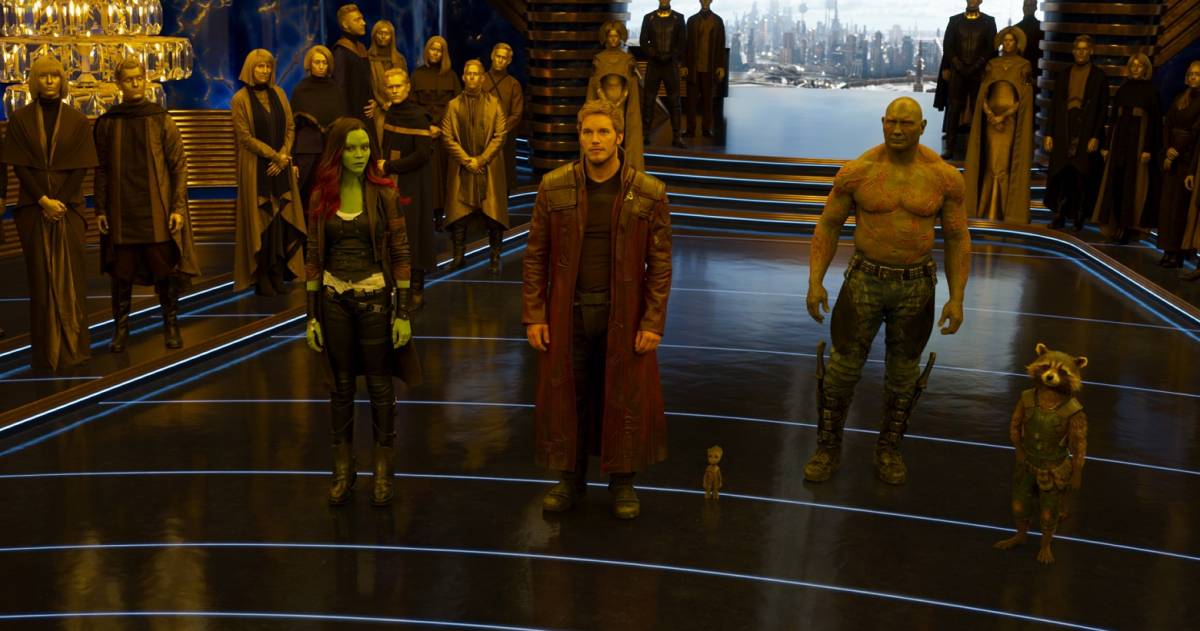 Every Marvel movie has one or two post-credits scenes to provide an epilogue to the movie you just watched and set up the next big Marvel adventure, but Guardians of the Galaxy director James Gunn had to one-up everyone with Vol. 2. Rather than the standard one or two scenes, Gunn included five post-credits scenes in his new movie, most of which are jokes, but one of which is vitally important.

Before you scroll any further, it’s worth mentioning that there will be spoilers for Guardians of the Galaxy Vol. 2 in this post. If you haven’t seen the movie yet, maybe just bookmark this page and come back later. In order to explain all of the mid- and post-credits scenes, some major story spoilers are unavoidable. You have been warned, so stop scrolling if you want to watch Vol. 2 totally unspoiled.

1. Kraglin learns to use Yondu’s arrow

Following the final battle in Guardians of the Galaxy Vol. 2, Yondu sacrifices himself to save Star-Lord. At his funeral, Star-Lord gives the Yaka Arrow (that pointy stick Yondu controlled by whistling) to Kraglin, Yondu’s right-hand man. In the first credits sequence (which actually takes place before the credits begin to roll), we see Kraglin struggling to control the arrow, continuously slamming it into the wall.

Eventually, he seems to be making progress, but just when you think he’s getting the hang of it, he promptly buries it into Drax’s neck in the other room. Drax begins screaming, at which point Kraglin slowly backs down the hallway. There’s no deeper meaning or hidden purpose here — it’s just funny to see Drax shouting at the top of his lungs with a magic arrow stuck in his neck.

2. Stakar gets the band back together

Early on in Vol. 2, we’re introduced to a man named Stakar, played by a totally committed Sylvester Stallone. Stakar leads his own Ravager clan and was the one to free Yondu from the Kree and give him his own clan. Once he found out Yondu was participating in child trafficking (i.e. raising Peter Quill), Stakar had no choice but to permanently exile Yondu and his clan from the Ravagers.

At the end of the movie, we see Stakar and all of the other Ravagers show up to give Yondu a proper send-off — something Stakar had sworn Yondu would not receive upon his death. In the second credits scene, we see Stakar speak to a ragtag group of humans and alien creatures, proposing that they reunite as a team once more. It turns out that the five characters are Martinex (Michael Rosenbaum), Charile-27 (Ving Rhames), Aleta Ogord (Michelle Yeoh), Mainframe (Miley Cyrus) and Krugarr.

All five of these characters have appeared in the Guardians of the Galaxy comics at some point, and some were even official team members. We don’t really expect to see them in any future movies, but perhaps they’ll play a small role in the intergalactic war coming in Infinity War.

Throughout Vol. 2, Star-Lord and the Guardians are on the run from the Sovereign — a race of perfect, golden beings from which Rocket decided to steal some very valuable batteries. After wasting countless resources to track down and capture the Guardians, Sovereign High Priestess Ayesha is at wit’s end. We see her stewing on her own in the third credits scene, when a servant wanders in to let her know that the council would like to have a word with her regarding the failed mission to bring the Guardians to justice.

Ayesha knows that the council is going to be angry with her, but she tells the servant that she thinks she might have created something that will make them happy. The servant sees Sovereign birthing pod and asks what’s so special about it. Ayesha tells her that she has created the perfect being, even more perfect than the already pretty much perfect Sovereign people. She calls it Adam.

Fans of Marvel comics will know that Ayesha is referring to Adam Warlock, a genetically engineered hero who played a major role in the original Infinity Gauntlet comic book event in 1991. Director James Gunn has already confirmed that Warlock will not appear in Avengers: Infinity War, but will likely play a major role of Guardians of the Galaxy Vol. 3, possibly as the main villain.

4. Groot is an angsty teenager

In the fourth credits scene, we see Star-Lord open the door to Groot’s room and we discover that Groot has grown back to about half of his original height. Once again, his personality reflects his new stature, which explains why he’s playing video games in a messy room and telling Star-Lord that he isn’t cool.

Once again, not an especially vital scene, but probably a hint as to what size Groot will be when we see him next in Avengers: Infinity War. Let’s just hope he’s less moody than in the credits.

Once the credits finish rolling, there’s a fifth and final scene that actually serves as a continuation of the Stan Lee cameo from earlier in the movie. We first see Stan Lee sitting on a barren planet or moon telling stories to a group of robed, bald-headed men as Rocket, Groot and Yondu warp jump through the galaxy to get to Ego’s planet as quickly as possible.

In the final scene, Lee is still sitting there, regaling the men with stories, when the suddenly turn and walk away. Lee yells after them telling them that they’re his ride home, and the screen cuts to black. There are two interesting elements to this scene. First, those bald men are what is know in the Marvel universe as Watchers — an ancient species that observes and records everything that happens. Uatu the Watcher is the most well-known Watcher, and despite the race’s strict policy of non-intervention, Uatu has on more than one occasion revealed himself to the heroes of Earth for a variety of reasons.

The second thing worth noting: It sure sounds like Stan Lee is recounting stories of his own cameo appearances from previous Marvel movies. Is Stan Lee a celestial being of some nature in the MCU? Is he a Watcher? How did he get to space anyway? Are we overthinking this? We’re just going to assume the answer to all of those questions is yes and look out for him in Spider-Man: Homecoming.